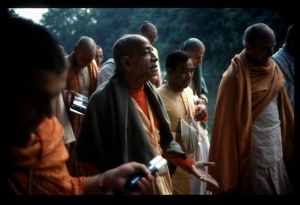 My dear Lord, as the Absolute Truth You are transcendental to material nature, and like the sky You are never entangled in any way. Still, being controlled by Your devotees' love, You accept many different forms, incarnating according to Your devotees' desires.

The pure devotees of the Lord propagate devotional service all over the world, and therefore, although separate from the personal form of the Lord, they are considered to be manifestations of God's mercy and potency. As stated in Caitanya-caritāmṛta (CC Antya 7.11): kṛṣṇa-śakti vinā nahe tāra pravartana.

The Lord is like the sky (vyoma) because although expanded everywhere, He is not entangled in anything. He is prakṛteḥ paraḥ, or completely transcendental to material nature. The Lord is fully self-satisfied and is therefore indifferent to the affairs of the material world. Still, because of His causeless mercy, the Lord desires to expand pure devotional service, and for this reason He incarnates within the material world to uplift the fallen conditioned souls.

The Lord descends in selected spiritual bodies to please His loving devotees. Sometimes He appears in His original form as Kṛṣṇa. And even Kṛṣṇa Himself appears in different forms to special devotees so that they may fully develop their loving sentiments for Him. Śrīla Jīva Gosvāmī gives several examples of the Lord's special mercy upon His devotees. Lord Kṛṣṇa personally went to the home of Jāmbavān and there displayed a form with slightly angry glances. In that form, the Lord enjoyed a fight with His devotee. The Lord displayed His form as Dattātreya to Atri Muni and similarly bestowed special mercy upon Lord Brahmā, the demigods, Akrūra and innumerable other devotees. And in Vṛndāvana the Lord displayed His most beautiful form as Govinda to the fortunate inhabitants.

Śrīla Madhvācārya has quoted from the Prakāśa-saṁhitā as follows. "The Lord accepts different spiritual bodies according to the desire of His devotees. For example, the Lord agreed to become the son of Vasudeva and Devakī. Thus, although Lord Kṛṣṇa has an eternal, blissful spiritual form, He appears to enter within the body of His devotee who becomes His mother. Although we speak of the Lord's 'taking on a body,' the Lord does not change His form, as do the conditioned souls, who must change their material bodies. The Lord appears in His own eternally unchangeable forms. Lord Hari always appears in the forms that are especially desired by His loving devotees, and never in other forms. However, if one thinks that the Lord, in the manner of an ordinary person taking birth, becomes the physical son of Vasudeva or other devotees, then one is victimized by illusion. The Lord merely expands His spiritual potency, causing His pure devotees to think, 'Kṛṣṇa is now my son.' One should understand that the Supreme Personality of Godhead never accepts or rejects a material body, nor does He ever give up His eternal spiritual forms; rather, the Lord eternally manifests His blissful bodies according to the loving sentiments of His eternal pure devotees."

Śrīla Jīva Gosvāmī mentions that the word vyoma also indicates the Lord's name of Paravyoma, or the Lord of the spiritual sky. One should not misinterpret this verse to mean that Lord Kṛṣṇa is impersonal, like the material sky, or that the form of Kṛṣṇa is merely another selected incarnation equal to any other. Such casual and whimsical speculations cannot be accepted as actual spiritual knowledge. Śrī Kṛṣṇa is the original Personality of Godhead (kṛṣṇas tu bhagavān svayam (SB 1.3.28)), and the Lord has explained elaborately in Bhagavad-gītā that He is the original source of everything. Therefore, the pure devotees of the Lord are eternally engaged, in full knowledge and bliss, in loving service to the Lord's original form as Kṛṣṇa. The whole purpose of Śrīmad-Bhāgavatam is to arouse our love for Lord Kṛṣṇa, and one should not foolishly misunderstand this great purpose.