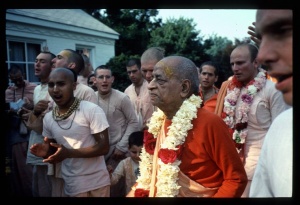 Devotion, direct experience of the Supreme Lord, and detachment from other things—these three occur simultaneously for one who has taken shelter of the Supreme Personality of Godhead, in the same way that pleasure, nourishment and relief from hunger come simultaneously and increasingly, with each bite, for a person engaged in eating.

Śrīla Jīva Gosvāmī has explained this analogy as follows: Bhakti, or devotion, may be compared to tuṣṭi (satisfaction) because they both take the form of pleasure. Pareśānubhava (experience of the Supreme Lord) and puṣṭi (nourishment) are analogous because both sustain one's life. Finally, virakti (detachment) and kṣud-apāya (cessation of hunger) may be compared because both free one from further hankering so that one may experience śānti, or peace.

The word viraktiḥ is very significant in this verse. Virakti means "detachment," whereas tyāga means "renunciation." According to Śrīla Bhaktisiddhānta Sarasvatī Ṭhākura, the word renunciation can be used in a situation in which one considers giving up an enjoyable object. But by considering everything to be potential paraphernalia in the service of Lord Kṛṣṇa, as described in the previous verse, one need not give thought to renunciation, for one uses everything in the proper way in the service of the Lord. Yukta-vairāgyam ucyate.

The very pleasant analogy of a good meal is given in this verse. A hungry man busily consuming a sumptuous plate of food is not interested in anything else happening around him. In fact, he considers any other topic or activity a disturbance to his concentration on the delicious meal. Similarly, as one advances in Kṛṣṇa consciousness one considers anything unrelated to the devotional service of Kṛṣṇa an obnoxious disturbance. Such concentrated love of Godhead has been described in the Second Canto of the Śrīmad-Bhāgavatam by the words tīvreṇa bhakti-yogena yajeta puruṣaṁ param (SB 2.3.10). One should not make an artificial show of renouncing the material world; rather, one should systematically train the mind to see everything as an expansion of the opulence of the Supreme Personality of Godhead. Just as a hungry materialistic man, upon seeing sumptuous food, immediately desires to put it in his mouth, an advanced devotee of Kṛṣṇa, upon seeing a material object, immediately becomes eager to use it for the pleasure of Kṛṣṇa. Without the spontaneous hunger to engage everything in the service of Kṛṣṇa and to dive deeper and deeper into the ocean of love of Kṛṣṇa, so-called realization of God or loose talk about so-called religious life is irrelevant to the actual experience of entering the kingdom of God.

According to Śrīla Viśvanātha Cakravartī Ṭhākura, the path of bhakti-yoga is so joyful and practical that even in the stage of sādhana-bhakti, in which one follows rules and regulations without an advanced understanding, one can perceive the ultimate result. As stated by Śrīla Rūpa Gosvāmī (Bhakti-rasāmṛta-sindhu 1.2.187),

As soon as one surrenders to the Supreme Lord, Kṛṣṇa (prapadyamānasya), giving up all other activities (viraktir anyatra ca), one is immediately to be considered a liberated soul (jīvan-muktaḥ). The Supreme Lord, Kṛṣṇa, is so merciful that when a living entity understands that the personality Kṛṣṇa is the source of everything and surrenders to the Lord, Kṛṣṇa personally takes charge of him and reveals to him within his heart that he is under the Lord's full protection. Thus devotion, direct experience of the Personality of Godhead, and detachment from other objects become manifest even in the beginning stage of bhakti-yoga, since bhakti-yoga begins at the point of liberation. Other processes have as their final goal salvation or liberation, but according to Bhagavad-gītā (BG 18.66),

If one surrenders to Kṛṣṇa one is immediately liberated and thus begins his career as a transcendental devotee with complete confidence in the Lord's protection.