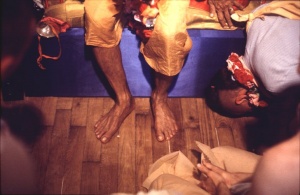 Thereupon, placing the Lord deeply within his heart, the great devotee Uddhava went to Badarikāśrama. By engaging there in austerities, he attained to the Lord's personal abode, which had been described to him by the only friend of the universe, Lord Kṛṣṇa Himself.

Śrī Uddhava returned to Dvārakā in the spiritual sky, according to Śrīla Viśvanātha Cakravartī Ṭhākura.