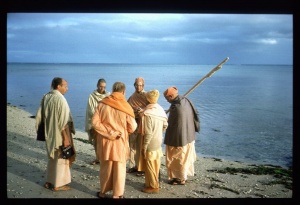 I offer my obeisances to that Supreme Personality of Godhead, the original and greatest of all beings, Lord Śrī Kṛṣṇa. He is the author of the Vedas, and just to destroy His devotees' fear of material existence, like a bee He has collected this nectarean essence of all knowledge and self-realization. Thus He has awarded to His many devotees this nectar from the ocean of bliss, and by His mercy they have drunk it.

Just as a bee extracts nectar from a flower without harming the flower, Lord Śrī Kṛṣṇa extracts the essence of all Vedic knowledge without disturbing the elaborate system of Vedic advancement. In other words, Lord Śrī Kṛṣṇa establishes Himself as the goal of Vedic knowledge without destroying preliminary, inferior processes that may be applicable to grossly materialistic men. Śrī Śukadeva Gosvāmī thus concludes by offering his obeisances to the spiritual master of the entire universe, Lord Śrī Kṛṣṇa.

Thus end the purports of the humble servants of His Divine Grace A.C. Bhaktivedanta Swami Prabhupāda to the Eleventh Canto, Twenty-ninth Chapter, of the Śrīmad-Bhāgavatam, entitled "Bhakti-yoga."