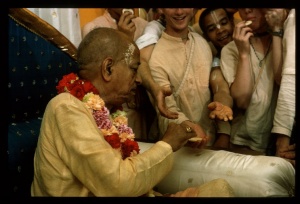 tyaktvā—abandoning; su-dustyaja—most difficult to give up; sura-īpsita—anxiously desired by the demigods; rājya-lakṣmīm—the goddess of fortune and her opulence; dharmiṣṭhaḥ—most perfectly fixed in religiousness; ārya-vacasā—according to the words of a brāhmaṇa (who had cursed Him to be deprived of all the happiness of family life); yat—He who; agāt—went; araṇyam—to the forest (taking to the renounced order of life); māyā-mṛgam—the conditioned soul, who is always searching out illusory enjoyment; dayitayā—out of sheer mercy; īpsitam—His desired object; anvadhāvat—running after; vande—I offer my homage; mahā-puruṣa—O Lord Mahāprabhu; te—to Your; caraṇa-aravindam—lotus feet.

O Mahā-puruṣa, I worship Your lotus feet. You gave up the association of the goddess of fortune and all her opulence, which is most difficult to renounce and is hankered after by even the great demigods. Being the most faithful follower of the path of religion, You thus left for the forest in obedience to a brāhmaṇa's curse. Out of sheer mercifulness You chased after the fallen conditioned souls, who are always in pursuit of the false enjoyment of illusion, and at the same time engaged in searching out Your own desired object, Lord Śyāmasundara.

According to the Vaiṣṇava ācāryas, this important verse of the Śrīmad-Bhāgavatam is understood to describe Caitanya Mahāprabhu, Lord Kṛṣṇa and also Lord Śrī Rāmacandra. This verse appears within the discussion by the sage Karabhājana of the yugāvatāras, or the different incarnations of the Personality of Godhead who deliver the conditioned souls of each age. The prayers ending with the words vande mahāpuruṣa te caraṇāravindam are understood to glorify the incarnation of Lord Kṛṣṇa in Kali-yuga known as Caitanya Mahāprabhu. Caitanya Mahāprabhu lived for twenty-four years in Navadvīpa as a householder and enjoyed immense popularity among both scholars and ordinary persons. His saṅkīrtana movement was completely supported by the local government, even though it was Muslim. And Caitanya Mahāprabhu had the pleasure of marrying the goddess of fortune. No ordinary woman of the material world, no matter how gorgeous she may be, can in any way compare with the beautiful goddess of fortune. Everyone in the universe, including Lord Brahmā, is searching after the goddess of fortune. Therefore it is stated here, surepsita.

However, Caitanya Mahāprabhu is Lord Kṛṣṇa appearing as a brāhmaṇa, and therefore He is certainly dharmiṣṭhaḥ, or the most religious. Actually the Supreme Personality of Godhead is always dharmiṣṭhaḥ, whether He appears as a cowherd boy, a great king or a brāhmaṇa, because the Lord Himself is the original source and personification of all religious principles. However, in the pastimes of Caitanya Mahāprabhu there are very few political or economic activities. Caitanya Mahāprabhu appeared as a great philosopher—brāhmaṇa, and thus He is certainly dharmiṣṭhaḥ. In Caitanya-caritāmṛta, in the Seventeenth Chapter of the Adi-līlā, it is described that a certain brāhmaṇa, who was well known for being harsh and cursing others, could not enter the kīrtana hall where Caitanya Mahāprabhu was performing kīrtana because the door was locked. Being very agitated and breaking his brāhmaṇa's thread, he cursed Caitanya Mahāprabhu the next day on the bank of the Ganges, saying, "I shall now curse You, for Your behavior has greatly aggrieved me. You shall be bereft of all material happiness." However, Caitanya Mahāprabhu felt great jubilation within Himself, since His mission was vairāgya-vidyā-nija-bhakti-yoga (CC Madhya 6.254)—to give up the illusion of material sense gratification and staunchly engage twenty-four hours a day in the devotional service of the Lord. Therefore, Caitanya Mahāprabhu took this curse as a blessing, and soon after, the Lord took sannyāsa. Thus it is stated in this verse that by the words of the Āryan, the brāhmaṇa (ārya-vacasā), Caitanya Mahāprabhu took sannyāsa (yad agād araṇyam) and went traveling through the different forests of India on the way to Vṛndāvana, and later South India. Caitanya Mahāprabhu wanted especially to preserve the prestige of the brāhmaṇa class, and therefore He decided to keep the brāhmaṇa's curse intact.

Śrīla Viśvanātha Cakravartī Ṭhākura has explained the word māyā-mṛgam as follows. Māyā means one's so-called wife, children and bank account, which keep one firmly bound up in the material bodily concept of life. The word mṛgam indicates mṛgyati, or "to search out." Thus, māyā-mṛgam indicates the conditioned living entity, who is always frantically searching for the latest up-to-the-minute sense gratification in the material bodily concept of society, friendship and love. Anvadhāvat indicates that Caitanya Mahāprabhu was always visibly going here and there, searching after the fallen conditioned souls. Caitanya Mahāprabhu would sometimes embrace the conditioned souls on the pretext of religious friendship or ecstasy. But actually, the Lord was touching the bodies of the conditioned souls to pull them out of the ocean of material existence and hurl them into the ocean of ecstatic love of Godhead. Thus Caitanya Mahāprabhu was the most merciful and munificent incarnation of the Lord, whose mercy surpassed the bounds of mundane discrimination in the matter of caste, color and creed.

The word dayitayā can be explained as follows. The Sanskrit word dayā means "mercy." Thus, by grammatical derivation, the word used in this verse, dayitayā, indicates that because of being the most merciful, Caitanya Mahāprabhu was busily engaged in rescuing the fallen conditioned souls, who are completely distracted and bewildered by the external illusory energy of the Lord. The quality of being the most merciful is part and parcel of the character of the mahā-puruṣa, or the Supreme Personality of Godhead.

According to Śrīla Jīva Gosvāmī, this verse also describes the incarnation of Lord Kṛṣṇa Himself in His original blackish form. Thus the words surepsita-rājya-lakṣmīm indicate śrī-mathurā-sampattim, or the opulence of Mathurā. Mathurā is described in Vedic literature as the reservoir of all opulence because of the touch of the Lord's lotus feet in that precinct. But Kṛṣṇa, although taking birth in the opulent city of Mathurā, transferred Himself to the forest village of Vṛndāvana. In this case the word ārya-vacasā indicates the order of Lord Kṛṣṇa's original parents, Vasudeva and Devakī. In Śrīmad-Bhāgavatam (10.3.22, 29) both Vasudeva and Devakī express their fear at the threat of Kaṁsa, who had already killed all of Kṛṣṇa's elder brothers. The word ārya-vacasā thus indicates that with great love they requested Kṛṣṇa to kindly make some arrangement to avoid Kaṁsa. And Kṛṣṇa, to obey their order, transferred Himself to the forest village of Vṛndāvana (yad agād araṇyam).

Śrīla Śrīdhara Svāmī has explained how this verse also describes the incarnation of Lord Śrī Rāmacandra. Although the Lord is completely independent and detached from everything, He becomes attached to His pure devotees due to their love for Him. In the great capital of Ayodhyā all of the citizens loved Rāmacandra more than can be described. In this context ārya-vacasā means that by the order of His father, who was just like His guru, Rāmacandra gave up everything and went to the forest. There He exhibited His great affection for mother Sītā and chased after māyā-mṛgam, or the illusory deer that had been created by the trick of Rāvaṇa. That this golden deer was especially desired by Śrīmatī Sītādevī is indicated by the word dayitayepsitam.

All of the limbs of the Lord's transcendental body are nondifferent and interchangeable, as stated in Brahma-saṁhitā (BS 5.38):

All of the limbs (aṅgāni) of the Supreme Lord are sakalendriya-vṛttimanti, or possessing all of the functions of all of the other limbs. Thus the two lotus feet of the Personality of Godhead are a plenary representation of the Supreme Personality of Godhead, and worshiping the Lord's lotus feet immediately places the worshiper in the ocean of transcendental bliss. There is no factual difference in spiritual quality between the incarnations of Caitanya Mahāprabhu, Lord Kṛṣṇa and Lord Śrī Rāmacandra. As stated in Vedic literatures, advaitam acyutam anādim ananta-rūpam (BS 5.33). Therefore there is no contradiction in the opinions of the ācāryas that this verse wonderfully glorifies three different manifestations of the one Absolute Truth. Caitanya Mahāprabhu is undoubtedly the Supreme Personality of Godhead. His transcendental attributes fulfill in every sense of the term the descriptions of the Absolute Truth as given in Vedic literature. In Caitanya-caritāmṛta, in the Third Chapter of the Adi-līlā, Kṛṣṇadāsa Kavirāja Gosvāmī and Śrīla Prabhupāda have given elaborate explanations of the transcendental status of Śrī Caitanya Mahāprabhu, which the reader can refer to for further information.