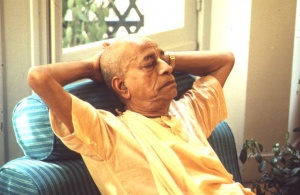 The Supreme Personality of Godhead said: O greatly fortunate Uddhava, you have accurately revealed My desire to withdraw the Yadu dynasty from the earth and return to My own abode in Vaikuṇṭha. Thus Lord Brahmā, Lord Śiva and all other planetary rulers are now praying for Me to resume My residence in Vaikuṇṭha.

Each and every demigod has his particular abode in the heavenly planets within the material universe. Although Lord Viṣṇu is sometimes counted among the demigods, His abode is in Vaikuṇṭha, the spiritual sky. The demigods are universal controllers within the kingdom of māyā, but Viṣṇu is the Lord of the illusory potency and many other spiritual potencies. His exalted residence does not lie within the kingdom of His insignificant maidservant māyā.

Lord Viṣṇu, the Personality of Godhead, is the Supreme Lord of all lords; the demigods are His separated parts and parcels. Being themselves minute jīva souls, the demigods are under the influence of the potency of māyā; but Lord Viṣṇu is always the supreme controller of māyā. The Personality of Godhead is the reservoir and root of all existence, and the material world is just a dim reflection of the brilliant scenery of His eternal, spiritual abode, where everything is infinitely beautiful and pleasurable. Viṣṇu is the supreme reality, and no living entity can ever be equal to or greater than Him. The Lord exists within His own unique category called viṣṇu-tattva, or the Supreme Personality of Godhead. All other prominent or extraordinary living entities owe their positions and potencies to the Lord. Ultimately Viṣṇu Himself is a plenary expansion of Lord Kṛṣṇa, the original source of all the viṣṇu-tattva and jīva-tattva expansions. Thus Lord Kṛṣṇa is the basis of everything.