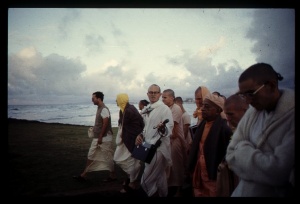 One who has developed transcendental knowledge never acts whimsically. Śrīla Rūpa Gosvāmī describes two stages of devotional service: sādhana-bhakti and rāgānugā-bhakti. Rāgānugā-bhakti is the stage of spontaneous love of Godhead, whereas sādhana-bhakti means the conscientious practice of the regulative principles of devotional service. In most cases, one who is now enjoying transcendental consciousness has rigidly practiced the rules and regulations of devotional service. Thus, due to previous practice, one spontaneously avoids sinful life and acts in accordance with the standards of ordinary piety. This does not mean that a self-realized soul is consciously avoiding sin and pursuing piety. Rather, due to his self-realized nature, he spontaneously engages in the most exalted spiritual activities, just as an innocent child may spontaneously exhibit good qualities such as kindness, tolerance, and so on. The spiritual platform is called śuddha-sattva, or purified goodness, to distinguish it from the material mode of goodness, which is always to some extent polluted by the lower modes of passion and ignorance. Thus if a man in material goodness appears to be most pious in the eyes of the world, we can only imagine the spotless character of a self-realized soul in purified spiritual goodness. Therefore it is stated in Bhagavad-gītā (SB 5.18.12):

If one is a pure devotee of Lord Kṛṣṇa, he will automatically exhibit all the exalted qualities of the demigods. Such manifestation of purity is spontaneous, as explained in this verse.