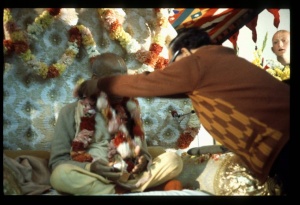 In the human form of life, those who are self-controlled and expert in the spiritual science of Sāṅkhya can directly see Me along with all of My potencies.

We find the following statement in the Vedas: puruṣatve cāvistarām ātmā sahita-prajñānena sampanna-tamo vijñātaṁ vadati vijñātaṁ paśyati veda śvastanaṁ veda lokālokau martyenāmṛtam īpsaty evaṁ sampanno 'thetareṣāṁ paśūnām āsanā-pipāse evābhijñānam. "In the human form of life, the soul is fully endowed with intelligence to understand spiritual knowledge. Thus, in human life the soul may speak realized knowledge, see the truth, know the future and also understand the reality both of this world and of the next. Taking advantage of the experience of mortal life, the soul in human form may endeavor for immortality, and the human body is fully equipped to achieve this end. In such an elevated state the soul is certainly well acquainted with the ordinary activities of animals, such as eating and drinking."

The human form of life (puruṣatve) is very significant because it affords us the opportunity to perfect our existence. The Sāṅkhya system mentioned here is best illustrated by the instructions of Lord Kapila to His mother, Devahūti. Lord Kapila is the Supreme Personality of Godhead, and His mother approached Him, saying,

"I am very sick of the disturbance caused by my material senses, for because of this sense disturbance, my Lord, I have fallen into the abyss of ignorance." (SB 3.25.7) Lord Kapila delivered to His mother a highly analytical summary of all material and spiritual reality. It is significant that Lord Kapila did not discriminate against His mother because she was a woman, nor did He consider her incapable of understanding the most elaborate spiritual knowledge. Thus, in a Kṛṣṇa conscious society of liberated souls, any man, woman or child may become a great devotee of Lord Kṛṣṇa without discrimination. It is also significant that in the highly intellectual Sāṅkhya system enunciated by Lord Kapila, the solid conclusion is surrender to the lotus feet of the pure devotees and love of Godhead. In Lord Kapila's instructions in the Third Canto of Śrīmad-Bhāgavatam, He emphasizes the need to take shelter of the pure devotees of the Lord. In the present verse Lord Kṛṣṇa says, sāṅkhya-yoga-viśāradāḥ: those who are expert in taking shelter of the pure devotees and who can thus understand the actual situation of this world are able to see Kṛṣṇa in His personal form, along with His internal and external potencies.

A spiritual master becomes bona fide by his full surrender to his spiritual master; but as explained in this chapter, one may also act as his own guru. This means that an intelligent and perceptive person can understand the nature of this world and his own limitations. Such a person then becomes very much inclined to associate with the pure devotees of the Lord and to receive the mercy of those who are advanced in Kṛṣṇa consciousness. According to Śrīla Viśvanātha Cakravartī Ṭhākura, sāṅkhya-yoga, as described here, refers to the rigorous intellectual progress of the jñāna-yoga system, along with the devotion of bhakti-yoga, which emphasizes the mercy of the lotus feet of the pure devotees.

Actually, jñāna-yoga is a factor in the bhakti-yoga system, since Kṛṣṇa is jñāna-gamya, or the goal of all knowledge. The Lord also says in Bhagavad-gītā (BG 10.10) that He personally enlightens a sincere devotee with all knowledge. In this chapter, Lord Kṛṣṇa is training Uddhava to see the Lord's personal form in the course of his daily experiences in the material world. The Lord has already indicated to Uddhava that he will travel throughout the world in samādhi, or trance, and now Lord Kṛṣṇa is preparing Uddhava to travel as a true sannyāsī seeing the Personality of Godhead everywhere.