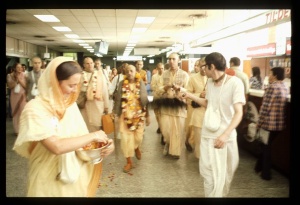 A thoughtful sage, even while living within a material body, should understand himself to be pure spirit soul. Similarly, one should see that the spirit soul enters within all forms of life, both moving and nonmoving, and that the individual souls are thus all-pervading. The sage should further observe that the Supreme Personality of Godhead, as the Supersoul, is simultaneously present within all things. Both the individual soul and the Supersoul can be understood by comparing them to the nature of the sky: although the sky extends everywhere and everything rests within the sky, the sky does not mix with anything, nor can it be divided by anything.

Although air exists within the sky, the sky, or space, is different from air. Even in the absence of air, space or sky is present. All material objects are situated within space, or within the vast material sky, but the sky remains undivided and, although accommodating all objects, never actually mixes with anything. In the same way one can understand the situation of both the individual soul and the Supersoul. The individual soul is all-pervading, because there are innumerable jīvātmās, which enter within all things; yet, as confirmed in Vedic literature, each individual ātmā remains infinitesimal. The Śvetāśvatara Upaniṣad (5.9) states,

"There are innumerable particles of spiritual atoms, which are measured as one ten-thousandth of the upper portion of the hair."

The Supreme Personality of Godhead, however. is all-pervading because He Himself is personally present everywhere. The Lord is known as advaita, or indivisible. Thus the same unique Personality of Godhead exists everywhere, just like the sky, and yet is not attached to anything, although everything is resting within Him. The Lord Himself has confirmed this analysis of His all-pervasiveness in Bhagavad-gītā (BG 9.6):

"As the almighty wind, blowing everywhere, always rests in ethereal space, know that in the same manner all beings rest in Me."

Therefore, although both the jīva soul and the Supersoul are said to be all-pervading, it should be remembered that there are innumerable individual jīva souls, whereas there is only one Supreme Personality of Godhead. The Lord is always supreme, and one who is actually a thoughtful sage never doubts the supreme position of the Lord.