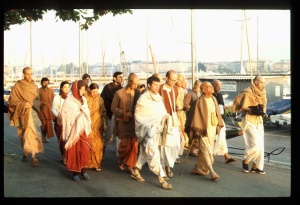 Even when reflected in various objects, the sun is never divided, nor does it merge into its reflection. Only those with dull brains would consider the sun in this way. Similarly, although the soul is reflected through different material bodies, the soul remains undivided and nonmaterial.

The sun is reflected in many objects, such as windows, mirrors, shiny metal, oil, water, and so on, yet the sun remains one and indivisible. Similarly, the eternal spirit soul within the body is reflected through the screen of the material body. Thus the soul appears to be old or young, fat or skinny, happy or sad. The soul may appear to be American, Russian, African, Hindu or Christian; however, the eternal soul in its natural position is free of any material designation.

The word sthūla-matibhiḥ in this verse indicates those whose intelligence is gross and dull. We have practical experience of a dog urinating on a valuable painting at an outdoor art show. Due to its dull intelligence, the dog could not appreciate the actual value of the painting. Similarly, unless one takes to Kṛṣṇa consciousness, one is grossly misusing the invaluable opportunity of human life. Human life is meant for self-realization, and we should not waste time bickering over material designations such as capitalist, communist, American, Russian, and so on. Instead, all people should take to the loving devotional service of God and realize their eternal, pure identity. One should understand the sun by observing its direct manifestation and not its distorted reflection on material objects. Similarly, one should consider every living being in terms of his pure spiritual identity beyond the distorted manifestation of material designations.

The word ātmā in this verse also refers to the Supreme Personality of Godhead. Just as we tend to observe ordinary jīva souls through the reflection of the material body, we tend to observe the Personality of Godhead through the distorting screen of our material mind. Thus, we imagine God to be impersonal or material or unknowable. When the sky is overcast, sunlight is the highest possible perception of the sun, which is covered by clouds. Similarly, when one's mind is fogged over with mental speculation one may take the light emanating from the transcendental body of God to be the highest spiritual truth. However, when the mind is spotlessly clear like a cloudless blue sky, one can see the actual form of the Personality of Godhead, Lord Kṛṣṇa. The Absolute Truth cannot be perfectly understood by the covered mind of the conditioned soul; rather, one must see the Lord through the clear blue sky of pure Kṛṣṇa consciousness, which is free from fruitive desires and mental speculation. Śrīla Bhaktivinoda Ṭhākura sings,

"The holy name of Lord Kṛṣṇa descends into the darkness of the material world just to benedict the conditioned souls. The holy name of Lord Kṛṣṇa is just like the sun that rises in the clear sky of the heart of the devotees." Such brilliant knowledge cannot be understood by those who are trying, in the name of either piety or atheism, to exploit the material creation of the Lord. One must become a pure devotee of Lord Kṛṣṇa, and then his knowledge will illuminate everything in all directions: yasmin vijñāte sarvam evam vijñātaṁ bhavati (Muṇḍaka Upaniṣad 1.3).