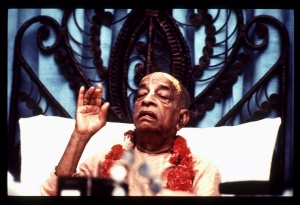 Now you should completely give up all attachment to your personal friends and relatives and fix your mind on Me. Thus being always conscious of Me, you should observe all things with equal vision and wander throughout the earth.

Śrīmad Vīrarāghava Ācārya has explained the concept of equal vision as follows: sama-dṛk sarvasya brahmātmakatvānusandhāna-rūpa-sama-dṛṣṭimān. "One who is on the path of self-realization should always endeavor to see the ultimate spiritual nature of all existence." The word mayi in this verse means paramātmani. One should fix one's mind on the Supreme Personality of Godhead, who is the source of everything. Thus as one passes one's life on the earth, using up one's allotted time, one should practice seeing all things and all people as part and parcel of the Absolute Truth, the Personality of Godhead. Since all living entities are part and parcel of Kṛṣṇa, ultimately they all have the same spiritual status. The material nature, also being an emanation of Kṛṣṇa, has a similar spiritual status, but although matter and spirit are both emanations from the Personality of Godhead, they do not exist exactly on the same level. In Bhagavad-gītā it is said that the spirit soul is the superior energy of the Lord, whereas the material nature is His inferior energy. However, since Lord Kṛṣṇa is equally present in all things, the word sama-dṛk in this verse indicates that one must ultimately see Kṛṣṇa within everything and everything within Kṛṣṇa. Thus equal vision is compatible with mature knowledge of the varieties present within this world.

Śrīla Viśvanātha Cakravartī Ṭhākura comments as follows on this verse. "At the end of His manifest pastimes on the earth, the Supreme Personality of Godhead, Kṛṣṇa, thought as follows within His mind: 'During My pastimes on the earth, I have satisfied the desires of all those devotees who anxiously desired to see Me. I have duly married many thousands of queens, headed by Rukmiṇī, whom I personally kidnapped, and I have killed innumerable demons in various places and by various means. I have attended meetings, reunions and ceremonies with many friends, relatives and well-wishers in cities such as Vṛndāvana, Mathurā, Dvārakā, Hastināpura and Mithilā, and thus I have kept constantly busy coming and going in the performance of pastimes.

" 'I further arranged to give My personal association to great devotees who are situated below the earthly planet. In order to please My mother Devakī and return her six deceased sons who were killed by Kaṁsa, I descended to the planet Sutala and blessed My great devotee Bali Mahārāja. In order to return the dead son of My spiritual master, Sāndīpani Muni, I personally went to the court of Ravinandana, or Yamarāja, and thus he was able to see Me face to face. I even blessed the residents of heaven, such as mother Aditi and Kaśyapa Muni, with My personal association when I traveled there to steal the pārijāta flower for My wife Satyabhāmā. And in order to please the inhabitants of Mahā-Viṣṇu's abode, such as Nanda, Sunanda and Sudarśana, I traveled to Mahā-vaikuṇṭhaloka to recover the deceased children of a frustrated brāhmaṇa. Thus, innumerable devotees who ardently desired to see Me have received the object of their prayers.

" 'Unfortunately Nara-Nārāyaṇa Ṛṣi and the great paramahaṁsa sages who live with Him in Badarikāśrama, although most enthusiastic to see Me, never had their desire fulfilled. I have been on the earth for 125 years, and the scheduled time is now up. Being busily engaged in My pastimes, I did not have time to give My blessings to these great sages. Nevertheless, Uddhava is practically the same as Me. He is a great devotee and shares My own transcendental opulences. Thus, he is the right person for Me to send to Badarikāśrama. I shall give Uddhava complete transcendental knowledge by which one becomes detached from the material world, and he in turn can deliver this knowledge, the science of transcending the kingdom of illusion, to the worthy sages at Badarikāśrama. In this way he can teach them the method of rendering loving devotional service to My lotus feet. Such loving devotional service rendered to Me is the most valuable treasure, and by hearing such knowledge the desires of the great sages such as Nara-Nārāyaṇa will be completely fulfilled.

" 'Those great souls who have surrendered unto Me are always equipped with transcendental knowledge and detachment from the material world. Sometimes, being busy in their devotional service, they may appear to forget Me. However, a pure devotee who has achieved the platform of love for Me will always be protected by such sincere devotion. Even if such a devotee should suddenly give up his life while neglecting to fix his mind intensely on Me, such a devotee's loving feelings are so powerful that they afford him all protection. Even if there is a temporary moment of forgetfulness, such devotion will bring the devotee to My lotus feet, which are beyond the vision of ordinary, materialistic persons. Uddhava is My pure devotee. Knowledge of Me and detachment from this world have again been aroused in him because he can never give up My association.' "

The sincere servants of Caitanya Mahāprabhu are vigorously endeavoring to spread this Kṛṣṇa consciousness movement for the pleasure of their spiritual master and Lord Kṛṣṇa. At the present time thousands of devotees in the Kṛṣṇa consciousness movement, in all parts of the world, are working long hours under difficult conditions to distribute transcendental literature and thus enlighten the general populace. In this effort the devotees have no personal motivation but are simply desirous of pleasing their spiritual master by distributing his books. The people who receive this literature usually have no previous experience of Kṛṣṇa consciousness, yet they are so impressed by the purity of the devotees they meet that they eagerly purchase the books and magazines. In order to execute the tremendous task of spreading Kṛṣṇa consciousness, the devotees are tirelessly laboring day and night because they are on the platform of loving devotion. Although superficially such busy devotees may occasionally not think directly of the lotus feet of Kṛṣṇa, such loving devotion will undoubtedly take them back to Kṛṣṇa's lotus feet, and being pleased by their service, the Lord Himself will again arouse their unflinching meditation upon His personal form. This is the beauty of bhakti-yoga which depends wholly and solely on the mercy of the all-merciful Personality of Godhead, Śrī Kṛṣṇa. This is the only totally safe means of uprooting the deep desires for material enjoyment, attaining pure love for Kṛṣṇa and going beyond the material universe to the kingdom of God. As stated in Bhagavad-gītā (BG 2.40):

Lord Kṛṣṇa also advised Uddhava in this verse to give up the illusory attachment to so-called friends and family within this material world. One may not be able to physically give up association with family and friends, but one should understand that everyone and everything is part and parcel of God and is meant for the pleasure of God. As soon as one thinks, "This is my personal family," immediately one will see the material world as no more than a place for enjoying family life. As soon as one is attached to one's so-called family, false prestige and material possessiveness arise. Actually, everyone is part and parcel of God and therefore, on the spiritual platform, related to all other entities. This is called kṛṣṇa-sambandha, or the constitutional relationship with Kṛṣṇa. It is not possible to advance to the highest stage of spiritual awareness and at the same time maintain a petty material concept of society, friendship and love. One should experience all relationships on the higher, spiritual platform of kṛṣṇa-sambandha, which means seeing everything in relation to Lord Kṛṣṇa, the Personality of Godhead.

One who is situated in his constitutional relationship with Kṛṣṇa can see all things in relation to Kṛṣṇa. He thus gives up the mundane urges of the body, mind and speech and travels throughout the earth as a devotee of the Lord. Such a highly elevated personality is called gosvāmī, or the master of the senses. This stage is described in Bhagavad-gītā (BG 18.54) by the words brahma-bhūtaḥ prasannātmā: on the spiritual platform one attains complete satisfaction.