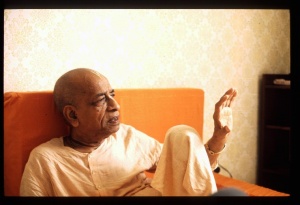 According to great sages, that which is the basis of the three modes of material nature and which manifests the variegated universe is called the sūtra or mahat-tattva. Indeed, this universe is resting within that mahat-tattva, and due to its potency the living entity undergoes material existence.

The cosmic manifestation is a reality because it emanates from the supreme reality, the Personality of Godhead. The material world, however, is temporary and full of problems. The conditioned soul foolishly tries to become the lord of this inferior creation and becomes separated from his real friend, the Supreme Lord. In this state, his only business is material sense gratification, and his real knowledge is lost.