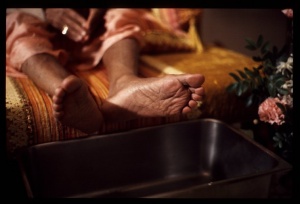 The material body is also my spiritual master because it teaches me detachment. Being subject to creation and destruction, it always comes to a painful end. Thus, although using my body to acquire knowledge, I always remember that it will ultimately be consumed by others, and remaining detached, I move about this world.

The words yathā tathāpi are significant in this verse. Although the body bestows great benefit by enabling one to learn about this world, one should always remember its unhappy, inevitable future. If cremated, the body is burned to ashes by fire; if lost in a lonely place, it is consumed by jackals and vultures; and if buried in a luxurious coffin, it decomposes and is consumed by insignificant insects and worms. Thus it is described as pārakyam, "ultimately to be consumed by others." One should, however, carefully maintain bodily health to execute Kṛṣṇa consciousness, but without undue affection or attachment. By studying the body's birth and death, one can acquire virakti-viveka, the intelligence to detach oneself from useless things. The word avasita indicates conviction. One should be convinced of all the truths of Kṛṣṇa consciousness.