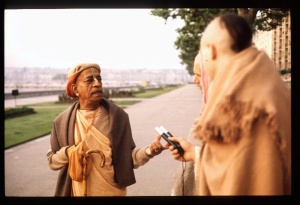 The Supreme Personality of Godhead said: Having thus spoken to King Yadu, the wise brāhmaṇa accepted obeisances and worship from the King and felt pleased within himself. Then bidding farewell, he left exactly as he had come.