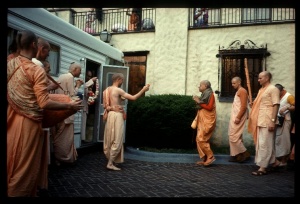 By the time the age of Kali ends, the bodies of all creatures will be greatly reduced in size, and the religious principles of followers of varṇāśrama will be ruined. The path of the Vedas will be completely forgotten in human society, and so-called religion will be mostly atheistic. The kings will mostly be thieves, the occupations of men will be stealing, lying and needless violence, and all the social classes will be reduced to the lowest level of śūdras. Cows will be like goats, spiritual hermitages will be no different from mundane houses, and family ties will extend no further than the immediate bonds of marriage. Most plants and herbs will be tiny, and all trees will appear like dwarf śamī trees. Clouds will be full of lightning, homes will be devoid of piety, and all human beings will have become like asses. At that time, the Supreme Personality of Godhead will appear on the earth. Acting with the power of pure spiritual goodness, He will rescue eternal religion.

Significantly, these verses point out that most so-called religions in this age will be atheistic (pāsaṇḍa-pracure dharme). In confirmation of the Bhāgavatam's prediction, the United States Supreme Court has recently ruled that to be considered a religion a system of belief need not recognize a supreme being. Also, many atheistic, voidistic belief systems, often imported from the Orient, have attracted the attention of modern atheistic scientists, who expound on the similarities between Eastern and Western voidism in fashionable, esoteric books.

These verses vividly describe many unsavory symptoms of the age of Kali. Ultimately, at the end of this age, Lord Kṛṣṇa will descend as Kalki and remove the thoroughly demonic persons from the face of the earth.