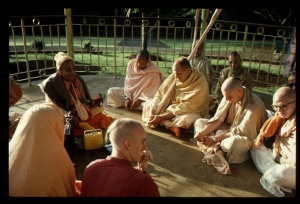 Lord Kalki, the Lord of the universe, will mount His swift horse Devadatta and, sword in hand, travel over the earth exhibiting His eight mystic opulences and eight special qualities of Godhead. Displaying His unequaled effulgence and riding with great speed, He will kill by the millions those thieves who have dared dress as kings.

These verses describe the thrilling pastimes of Lord Kalki. Anyone would be attracted by the sight of a powerful, beautiful man riding on a wonderful horse at lightning speed, chastising and devastating cruel, demonic people with the sword in His hand.

Of course, fanatical materialists may argue that this picture of Lord Kalki is a mere anthropomorphic creation of the human mind—a mythological deity created by people who need to believe in some superior being. But this argument is not logical, nor does it prove anything. It is merely the opinion of certain people. We need water, but that does not mean man creates water. We also need food, oxygen and many other things that we do not create. Since our general experience is that our needs correspond to available objects existing in the external world, that we appear to need a Supreme Lord would tend to indicate that in fact there is a Supreme Lord. In other words, nature endows us with a sense of need for things that actually exist and that are in fact necessary for our well-being. Similarly, we experience a need for God because we are in fact part of God and cannot live without Him. At the end of Kali-yuga this same God will appear as the mighty Kalki avatāra and beat the pollution out of the demons.