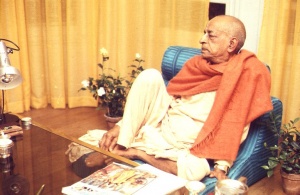 In Kali-yuga, wealth alone will be considered the sign of a man's good birth, proper behavior and fine qualities. And law and justice will be applied only on the basis of one's power.

In the age of Kali, a man is considered high class, middle class or low class merely according to his financial status, regardless of his knowledge, culture and behavior. In this age there are many great industrial and commercial cities with luxurious neighborhoods reserved for the wealthy. On beautiful tree-lined roads, within apparently aristocratic homes, it is not unusual to find many perverted, dishonest and sinful activities taking place. According to Vedic criteria, a man is considered high class if his behavior is enlightened, and his behavior is considered enlightened if his activities are dedicated to promoting the happiness of all creatures. Every living being is originally happy, because in all living bodies there is an eternal spiritual spark that partakes of the divine conscious nature of God. When our original spiritual awareness is revived, we become naturally blissful and satisfied in knowledge and peace. An enlightened, or educated, man should endeavor to revive his own spiritual understanding, and he should help others experience the same sublime consciousness.

The great Western philosopher Socrates stated that if a man is enlightened he will automatically act virtuously, and Śrīla Prabhupāda confirmed this fact. But in the Kali-yuga this obvious truth is disregarded, and the search for knowledge and virtue has been replaced by a vicious, animalistic competition for money. Those who prevail become the "top dogs" of modern society, and their consumer power grants them a reputation as most respectable, aristocratic and well educated.

This verse also states that in the age of Kali brute strength (balam eva) will determine law and "justice." We should keep in mind that in the progressive, Vedic culture, there was no artificial dichotomy between the spiritual and the public realms. All civilized people took it for granted that God is everywhere and that His laws are binding upon all creatures. The Sanskrit word dharma, therefore, indicates one's social, or public, obligation as well as one's religious duty. Thus responsibly caring for one's family is dharma, and engaging in the loving service of God is also dharma. This verse indicates, however, that in the age of Kali the principle of "might makes right" will hold sway.

In the first chapter of this canto we observed how this principle infiltrated India's past. Similarly, as the Western world achieved political, economic and technological hegemony over Asian lands, bogus propaganda was disseminated to the effect that Indian, and in general all non-Western, religion, theology and philosophy are somehow primitive and unscientific—mere mythology and superstition. Fortunately this arrogant, irrational view is now dissipating, and people all over the world are beginning to appreciate the staggering wealth of spiritual philosophy and science available in the Sanskrit literature of India. In other words, many intelligent people no longer consider traditional Western religion or empirical science, which has virtually superseded religion as the official Western dogma, necessarily authoritative merely because the West has politically and economically subdued other geographic and ethnic configurations of humanity. Thus there is now hope that spiritual issues can be contested and resolved on a philosophical level and not merely by a crude test of arms.

Next this verse points out that the rule of law will be applied unequally to the powerful and the powerless. Already in many nations justice is available only to those who can pay and fight for it. In a civilized state, every man, woman and child must have equal and rapid access to a fair system of laws. In modern times we sometimes refer to this as human rights. Certainly human rights are one of the more obvious casualties of the age of Kali.