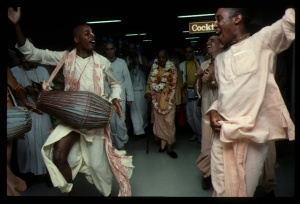 As long as Lord Śrī Kṛṣṇa, the husband of the goddess of fortune, touched the earth with His lotus feet, Kali was powerless to subdue this planet.

Although even during the time of Lord Kṛṣṇa's presence on earth Kali had entered the earth to a slight extent through the impious activities of Duryodhana and his allies, Lord Kṛṣṇa consistently suppressed Kali's influence. Kali could not flourish until Lord Kṛṣṇa had left the earth.