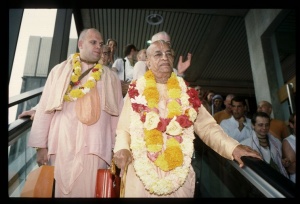 At the end of the age of Kali, these two kings, having received instruction directly from the Supreme Personality of Godhead, Vāsudeva, will return to human society and reestablish the eternal religion of man, characterized by the divisions of varṇa and āśrama, just as it was before.

According to this and the previous verse, the two great kings who will reestablish human culture after the end of Kali-yuga have already descended to the earth, where they are patiently waiting to render their devotional service to Lord Viṣṇu.