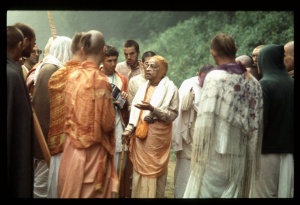 A person's spiritual position will be ascertained merely according to external symbols, and on that same basis people will change from one spiritual order to the next. A person's propriety will be seriously questioned if he does not earn a good living. And one who is very clever at juggling words will be considered a learned scholar.

The previous verse stated that in the age of Kali the priestly class will be recognized by external symbols alone, and this verse extends the same principle to the other orders of society, namely the political or military class, the business or productive class, and finally the laborer or artisan class.

Modern sociologists have demonstrated that in those societies chiefly governed by the Protestant ethic, poverty is considered a sign of indolence, dirtiness, stupidity, immorality and worthlessness. In a God-conscious society, however, many persons voluntarily decide to dedicate their lives not to material acquisition but rather to the pursuit of knowledge and spirituality. Thus a preference for the simple and the austere may indicate intelligence, self-control and sensitivity to the higher purpose of life. Of course, in itself poverty does not establish these virtues, but it may sometimes be the result of them. In the Kali-yuga, however, this possibility is often forgotten.

Intellectuality is another casualty of the bewildering age of Kali. Modern so-called philosophers and scientists have created a technical, esoteric terminology for each branch of learning, and when they give lectures people consider them learned simply because of their ability to speak that which no one else can understand. In Western culture, the Greek Sophists were among the first to systematically argue for rhetoric and "efficiency" above wisdom and purity, and sophistry certainly flourishes in the twentieth century. Modern universities have very little wisdom, though they do possess a virtual infinity of technical data. Although many modern thinkers are fundamentally ignorant of the higher, spiritual reality, they are, so to speak, "good talkers," and most people simply don't notice their ignorance.