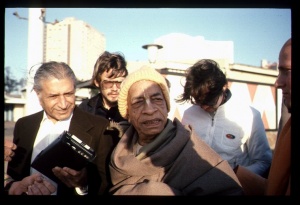 The right situation for the living entities is to obey the laws of the Lord and thus be in perfect peace of mind under the protection of the Supreme Personality of Godhead. The Manus and their laws are meant to give right direction in life. The impetus for activity is the desire for fruitive work.

This material world is created, maintained for some time, and again annihilated by the will of the Lord. The ingredients for creation and the subordinate creator, Brahmā, are first created by Lord Viṣṇu in His first and second incarnations. The first puruṣa incarnation is Mahā-Viṣṇu, and the second puruṣa incarnation is the Garbhodakaśāyī Viṣṇu, from whom Brahmā is created. The third puruṣa avatāra is the Kṣīrodakaśāyī Viṣṇu, who lives as the Supersoul of everything in the universe and maintains the creation generated by Brahmā. Śiva is one of the many sons of Brahmā, and he annihilates the creation. Therefore the original creator of the universe is Viṣṇu, and He is also the maintainer of the created beings by His causeless mercy. As such, it is the duty of all conditioned souls to acknowledge the victory of the Lord and thus become pure devotees and live peacefully in this world, where miseries and dangers are always in existence. The conditioned souls, who take this material creation as the place for satisfaction of the senses and thus are illusioned by the external energy of Viṣṇu, remain again to be subjected to the laws of material nature, creation and destruction.

In the Bhagavad-gītā it is said that beginning from the topmost planet of this universe down to the lowest planet, Pātālaloka, all are destructible, and the conditioned souls may travel in space either by good or bad work or by modern spacecraft, but they are sure to die everywhere, although the duration of life in different planets is different. The only means to attain eternal life is to go back home, back to Godhead, where there is no more rebirth as in the material planets. The conditioned souls, being unaware of this very simple fact because of forgetting their relationship with the Lord of Vaikuṇṭha, try to plan out a permanent life in this material world. Being illusioned by the external energy, they thus become engaged in various types of economic and religious development, forgetting that they are meant for going back home, back to Godhead. This forgetfulness is so strong due to the influence of māyā that the conditioned souls do not at all want to go back to Godhead. By sense enjoyment they become victims of birth and death repeatedly and thus spoil human lives which are chances for going back to Viṣṇu. The directive scriptures made by the Manus in different ages and millenniums are called sad-dharma, good guidance for the human beings, who should take advantage of all the revealed scriptures for their own interest, to make life's successful termination. The creation is not false, but it is a temporary manifestation just to give a chance for the conditioned souls to go back to Godhead. The desire to go back to Godhead and functions performed in that direction form the right path of work. When such a regulative path is accepted, the Lord gives all protection to His devotees by His causeless mercy, while the nondevotees risk their own activities to bind themselves in a chain of fruitive reactions. The word sad-dharma is significant in this connection. Sad-dharma, or duty performed for going back to Godhead and thus becoming His unalloyed devotee, is the only pious activity; all others may pretend to be pious, but actually they are not. It is for this reason only that the Lord advises in the Bhagavad-gītā that one give up all so-called religious activities and completely engage in the devotional service of the Lord to become free from all anxieties due to the dangerous life of material existence. To work situated in sad-dharma is the right direction of life. One's aim of life should be to go back home, back to Godhead, and not be subjected to repeated births and deaths in the material world by getting good or bad bodies for temporary existence. Herein lies the intelligence of human life, and one should desire the activities of life in that way.