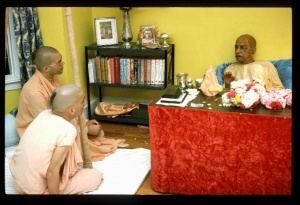 The merging of the living entity, along with his conditional living tendency, with the mystic lying down of the Mahā-Viṣṇu is called the winding up of the cosmic manifestation. Liberation is the permanent situation of the form of the living entity after he gives up the changeable gross and subtle material bodies.

As we have discussed several times, there are two types of living entities. Most of them are ever liberated, or nitya-muktas, while some of them are ever conditioned. The ever-conditioned souls are apt to develop a mentality of lording over the material nature, and therefore the material cosmic creation is manifested to give the ever-conditioned souls two kinds of facilities. One facility is that the conditioned soul can act according to his tendency to lord it over the cosmic manifestation, and the other facility gives the conditioned soul a chance to come back to Godhead. So after the winding up of the cosmic manifestation, most of the conditioned souls merge into the existence of the Mahā-Viṣṇu Personality of Godhead, lying in His mystic slumber, to be created again in the next creation. But some of the conditioned souls, who follow the transcendental sound in the form of Vedic literatures and are thus able to go back to Godhead, attain spiritual and original bodies after quitting the conditional gross and subtle material bodies. The material conditional bodies develop out of the living entities' forgetfulness of their relationship with Godhead, and during the course of the cosmic manifestation, the conditioned souls are given a chance to revive their original status of life with the help of revealed scriptures, so mercifully compiled by the Lord in His different incarnations. Reading or hearing of such transcendental literatures helps one become liberated even in the conditional state of material existence. All the Vedic literatures aim at devotional service to the Personality of Godhead, and as soon as one is fixed upon this point, he at once becomes liberated from conditional life. The material gross and subtle forms are simply due to the conditioned soul's ignorance and as soon as he is fixed in the devotional service of the Lord, he becomes eligible to be freed from the conditioned state. This devotional service is transcendental attraction for the Supreme on account of His being the source of all pleasing humors. Everyone is after some pleasure of humor for enjoyment, but does not know the supreme source of all attraction (raso vai saḥ rasaṁ hy evāyaṁ labdhvānandī bhavati). The Vedic hymns inform everyone about the supreme source of all pleasure; the unlimited fountainhead of all pleasure is the Personality of Godhead, and one who is fortunate enough to get this information through transcendental literatures like Śrīmad-Bhāgavatam becomes permanently liberated to occupy his proper place in the kingdom of God.