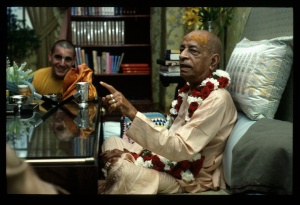 In that transcendental state of labdhopaśānti, there is no supremacy of devastating time, which controls even the celestial demigods who are empowered to rule over mundane creatures. (And what to speak of the demigods themselves?) Nor is there the mode of material goodness, nor passion, nor ignorance, nor even the false ego, nor the material Causal Ocean, nor the material nature.

Devastating time, which controls even the celestial demigods by its manifestations of past, present and future, does not act on the transcendental plane. The influence of time is exhibited by the symptoms of birth, death, old age and disease, and these four principles of material conditions are present everywhere in any part of the material cosmos up to the planet Brahmaloka, where the duration of life of the inhabitants appears to us to be fabulous. Insurmountable time even brings about the death of Brahmā, so what to speak of other demigods like Indra, Candra, Sūrya, Vāyu and Varuṇa? The astronomical influence directed by the different demigods over mundane creatures is also conspicuous by its absence. In material existence, the living entities are afraid of Satanic influence, but for a devotee on the transcendental plane there is no such fear at all. The living entities change their material bodies in different shapes and forms under the influence of the different modes of material nature, but in the transcendental state the devotee is guṇa-tīta, or above the material modes of goodness, passion and ignorance. Thus the false ego of "I am the lord of all I survey" does not arise there. In the material world the false ego of the living being trying to lord it over the material nature is something like the moth's falling in a blazing fire. The moth is captivated by the glaring beauty of the fire, and when he comes to enjoy it, the blazing fire consumes him. In the transcendental state the living being is pure in his consciousness, and as such he has no false ego to lord it over the material nature. Rather, his pure consciousness directs him to surrender unto the Supreme Lord, as stated in the Bhagavad-gītā (BG 7.19): vāsudevaḥ sarvam iti sa mahātmā sudurlabhaḥ. All this indicates that in the transcendental state there is neither material creation nor the Causal Ocean for material nature.

The above-mentioned state of affairs is factual on the transcendental plane, but is factually revealed in a transcendentalist's knowledge of the advanced state of pure consciousness. Such transcendentalists are of two types, namely the impersonalists and the devotees. For the impersonalist the ultimate goal or destination is the brahmajyoti of the spiritual sky, but for the devotees the ultimate goal is the Vaikuṇṭha planets. The devotees experience the above-mentioned state of affairs by attainment of spiritual forms for activity in the transcendental loving service of the Lord. But the impersonalist, because of his neglecting the association of the Lord, does not develop a spiritual body for spiritual activity, but remains a spiritual spark only, merged in the effulgent spiritual rays of the Supreme Personality of Godhead. The Lord is the full-fledged form of eternity, bliss and knowledge, but the formless brahmajyoti is simply eternity and knowledge. The Vaikuṇṭha planets are also forms of eternity, bliss and knowledge, and therefore the devotees of the Lord, who are admitted into the abode of the Lord, also get bodies of eternity, bliss and knowledge. As such there is no difference between one and another. The Lord's abode, name, fame, entourage, etc., are of the same transcendental quality, and how this transcendental quality differs from the material world is explained herewith in this verse. In the Bhagavad-gītā, three principal subjects have been explained by Lord Śrī Kṛṣṇa, namely karma-yoga, jñāna-yoga and bhakti-yoga, but one can reach the Vaikuṇṭha planets by the practice of bhakti-yoga only. The other two are incompetent in helping one reach the Vaikuṇṭhalokas, although they can, however, conveniently take one to the effulgent brahmajyoti, as described above.