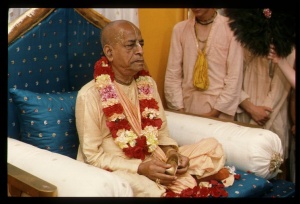 Sūta Gosvāmī said: Thus Śukadeva Gosvāmī, being invited by Mahārāja Parīkṣit to speak on topics of the Lord Śrī Kṛṣṇa with the devotees, was very much pleased.

Śrīmad-Bhāgavatam can be legitimately discussed only among the devotees of the Lord. As the Bhagavad-gītā was authoritatively discussed between Lord Kṛṣṇa and Arjuna (the Lord and the devotee respectively), similarly Śrīmad-Bhāgavatam, which is the postgraduate study of the Bhagavad-gītā, can also be discussed between the scholars and devotees like Śukadeva Gosvāmī and Mahārāja Parīkṣit. Otherwise the real taste of the nectar cannot be relished. Śukadeva Gosvāmī was pleased with Mahārāja Parīkṣit because he was not at all tired of hearing the topics of the Lord and was more and more anxious to hear them on and on with interest. Foolish interpreters unnecessarily tackle the Bhagavad-gītā and Śrīmad-Bhāgavatam when they have no access to the subject matter. There is no use in nondevotees' meddling with the two topmost Vedic literatures, and therefore Śaṅkarācārya did not touch Śrīmad-Bhāgavatam for commentation. In his commentation on the Bhagavad-gītā, Śrīpāda Śaṅkarācārya accepted Lord Kṛṣṇa as the Supreme Personality of Godhead, but later on he commented from the impersonalist's view. But, being conscious of his position, he did not comment on the Śrīmad-Bhāgavatam.

Śrīla Śukadeva Gosvāmī was protected by Lord Kṛṣṇa (vide Brahma-vaivarta Purāṇa), and therefore he is known as Brahmarāta, and Śrīmān Parīkṣit Mahārāja was protected by Viṣṇu, and thus he is known as Viṣṇurāta. As devotees of the Lord, they are always protected by the Lord. It is clear also in this connection that a Viṣṇurāta should hear Śrīmad-Bhāgavatam from Brahmarāta and no one else because others misrepresent the transcendental knowledge and thus spoil one's valuable time.