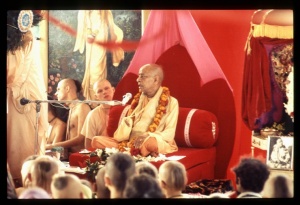 Kṣatriyas are specifically meant to maintain the brāhmaṇas because if the brāhmaṇas are protected, then the head of civilization is protected. Brāhmaṇas are supposed to be the head of the social body; if the head is clear and has not gone mad, then everything is in proper position. The Lord is described thus: namo brahmaṇya-devāya go-brāhmaṇa-hitāya ca. The purport of this prayer is that the Lord specifically protects the brāhmaṇas and the cows, and then He protects all other members of society (jagad-dhitāya). It is His will that universal welfare work depends on the protection of cows and brāhmaṇas; thus brahminical culture and cow protection are the basic principles for human civilization. Kṣatriyas are especially meant to protect the brāhmaṇas, as is the supreme will of the Lord: go-brāhmaṇa-hitāya ca. As, within the body, the heart is a very important part, so the brāhmaṇas are also the important element in human society. The kṣatriyas are more like the whole body; even though the whole body is bigger than the heart, the heart is more important.