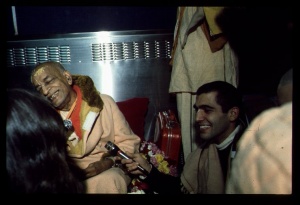 The human soul further prays: The living entity is put under the influence of material nature and continues a hard struggle for existence on the path of repeated birth and death. This conditional life is due to his forgetfulness of his relationship with the Supreme Personality of Godhead. Therefore, without the Lord's mercy, how can he again engage in the transcendental loving service of the Lord?

The Māyāvādī philosophers say that simply by cultivation of knowledge by mental speculation, one can be liberated from the condition of material bondage. But here it is said one is liberated not by knowledge but by the mercy of the Supreme Lord. The knowledge the conditioned soul gains by mental speculation, however powerful it may be, is always too imperfect to approach the Absolute Truth. It is said that without the mercy of the Supreme Personality of Godhead one cannot understand Him or His actual form, quality and name. Those who are not in devotional service go on speculating for many, many thousands of years, but they are still unable to understand the nature of the Absolute Truth.

One can be liberated in the knowledge of the Absolute Truth simply by the mercy of the Supreme Personality of Godhead. It is clearly said herein that our memory is lost because we are now covered by His material energy. Arguments may be put forward as to why we have been put under the influence of this material energy by the supreme will of the Lord. This is explained in Bhagavad-gītā, where the Lord says, "I am sitting in everyone's heart, and due to Me one is forgetful or one is alive in knowledge." The forgetfulness of the conditioned soul is also due to the direction of the Supreme Lord. A living entity misuses his little independence when he wants to lord it over material nature. This misuse of independence, which is called māyā, is always available, otherwise there would be no independence. Independence implies that one can use it properly or improperly. It is not static; it is dynamic. Therefore, misuse of independence is the cause of being influenced by māyā.

Māyā is so strong that the Lord says that it is very difficult to surmount her influence. But one can do so very easily "if he surrenders unto Me." Mām eva ye prapadyante: anyone who surrenders unto Him can overcome the influence of the stringent laws of material nature. It is clearly said here that a living entity is put under the influence of māyā by His will, and if anyone wants to get out of this entanglement, this can be made possible simply by His mercy.

The activities of the conditioned souls under the influence of material nature are explained here. Every conditioned soul is engaged in different types of work under the influence of material nature. We can see in the material world that the conditioned soul acts so powerfully that he is playing wonderfully in creating the so-called advancements of material civilization for sense gratification. But actually his position is to know that he is an eternal servant of the Supreme Lord. When he is actually in perfect knowledge, he knows that the Lord is the supreme worshipful object and that the living entity is His eternal servant. Without this knowledge, he engages in material activities; that is called ignorance.