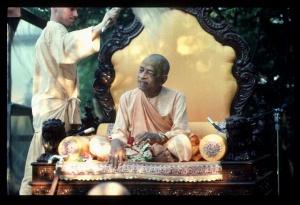 Bitten again and again all over the body by the hungry worms in the abdomen itself, the child suffers terrible agony because of his tenderness. He thus becomes unconscious moment after moment because of the terrible condition.

The miserable condition of material existence is not only felt when we come out of the womb of the mother, but is also present within the womb. Miserable life begins from the moment the living entity begins to contact his material body. Unfortunately, we forget this experience and do not take the miseries of birth very seriously. In Bhagavad-gītā, therefore, it is specifically mentioned that one should be very alert to understand the specific difficulties of birth and death. Just as during the formation of this body we have to pass through so many difficulties within the womb of the mother, at the time of death there are also many difficulties. As described in the previous chapter, one has to transmigrate from one body to another, and the transmigration into the bodies of dogs and hogs is especially miserable. But despite such miserable conditions, due to the spell of māyā we forget everything and become enamored by the present so-called happiness, which is described as actually no more than a counteraction to distress.