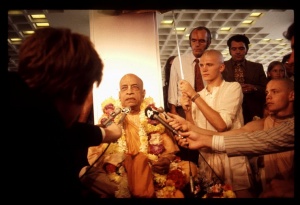 O my lord, I have repeatedly heard about these higher and lower statuses of human society from the mouth of Vyāsadeva, and I am quite satiated with all these lesser subject matters and their happiness. They have not satisfied me with the nectar of topics about Kṛṣṇa.

Because people are very much interested in hearing social and historical presentations, Śrīla Vyāsadeva has compiled many books such as the Purāṇas and Mahābhārata. These books are reading matter for the mass of people, and they were compiled with a view to reviving their God consciousness, now forgotten in the conditional life of material existence. The real purpose of such literatures is not so much to present topics of historical references, but to revive the people's sense of God consciousness. For example, Mahābhārata is the history of the Battle of Kurukṣetra, and common people read it because it is full of topics regarding the social, political and economic problems of human society. But factually the most important part of Mahābhārata is Bhagavad-gītā, which is automatically taught to readers along with the historical narrations of the Battle of Kurukṣetra.

Vidura explained to Maitreya his position of being fully satiated with the knowledge of mundane social and political topics and having no more interest in them. He was anxious to hear transcendental topics regarding Lord Śrī Kṛṣṇa. Because there were insufficient topics directly concerning Kṛṣṇa in the Purāṇas, Mahābhārata, etc., he was not satisfied and wanted to know more about Kṛṣṇa. Kṛṣṇa-kathā, or topics regarding Kṛṣṇa, are transcendental, and there is no satiation in hearing such topics. Bhagavad-gītā is important on account of its being kṛṣṇa-kathā, or speeches delivered by Lord Kṛṣṇa. The story of the Battle of Kurukṣetra may be interesting for the mass of people, but to a person like Vidura, who is highly advanced in devotional service, only kṛṣṇa-kathā and that which is dovetailed with kṛṣṇa-kathā is interesting. Vidura wanted to hear of everything from Maitreya, and so he inquired from him, but he desired that all the topics be in relationship with Kṛṣṇa. As fire is never satisfied in its consumption of firewood, so a pure devotee of the Lord never hears enough about Kṛṣṇa. Historical events and other narrations concerning social and political incidents all become transcendental as soon as they are in relationship with Kṛṣṇa. That is the way to transform mundane things into spiritual identity. The whole world can be transformed into Vaikuṇṭha if all worldly activities are dovetailed with kṛṣṇa-kathā.