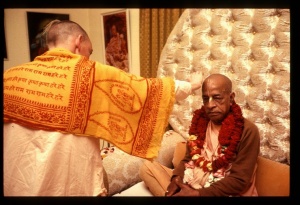 While all the Pracetās were executing religious rituals and sacrificial ceremonies and thus worshiping the Supreme Personality of Godhead for His satisfaction, the great sage Nārada described the transcendental qualities of Dhruva Mahārāja.

Nārada Muni is always glorifying the pastimes of the Lord. In this verse we see that not only does he glorify the Lord, but he also likes to glorify the devotees of the Lord. The great sage Nārada's mission is to broadcast the devotional service of the Lord. For this purpose he has compiled the Nārada-pañcarātra, a directory of devotional service, so that devotees can always take information about how to execute devotional service and thus engage twenty-four hours a day in performing sacrifices for the pleasure of the Supreme Personality of Godhead. As stated in the Bhagavad-gītā, the Lord has created four orders of social life, namely brāhmaṇa, kṣatriya, vaiśya and śūdra. In the Nārada-pañcarātra it is very clearly described how each of the social orders can please the Supreme Lord. In the Bhagavad-gītā (BG 18.45) it is stated, sve sve karmaṇy abhirataḥ saṁsiddhiṁ labhate naraḥ: by executing one's prescribed duties one can please the Supreme Lord. In the Śrīmad-Bhāgavatam(SB 1.2.13) also it is stated, svanuṣṭhitasya dharmasya saṁsiddhir hari-toṣaṇam: the perfection of duty is to see that by discharging one's specific duties one satisfies the Supreme Personality of Godhead. When the Pracetās were performing sacrifices according to this direction, Nārada Muni was satisfied to see these activities, and he also wanted to glorify Dhruva Mahārāja in that sacrificial arena.