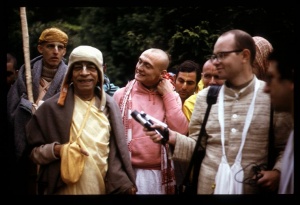 All sages, brāhmaṇas and fire-gods present, please hear me with attention, for I speak about the manners of gentle persons. I do not speak out of ignorance or envy.

In speaking against Lord Śiva, Dakṣa tried to pacify the assembly by presenting in a very tactful way that he was going to speak about the manners of gentle persons, although naturally this might affect some unmannerly upstarts and the assembly might be unhappy because they did not want even unmannerly persons to be offended. In other words, he was in complete knowledge that he was speaking against Lord Śiva in spite of Śiva's spotless character. As far as envy is concerned, from the very beginning he was envious of Lord Śiva; therefore he could not distinguish his own particular envy. Although he spoke like a man in ignorance, he wanted to cover his statements by saying that he was not speaking for impudent and envious reasons.