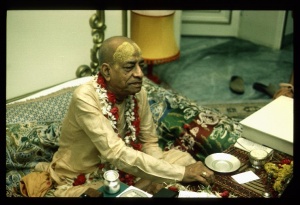 The original king, Mahārāja Pṛthu, his eyes full of tears and his voice faltering and choked up, could neither see the Lord very distinctly nor speak to address the Lord in any way. He simply embraced the Lord within his heart and remained standing in that way with folded hands.

Just as Kṛṣṇa is addressed in the Brahma-saṁhitā as ādi-puruṣa, the original personality, so King Pṛthu, being an empowered incarnation of the Lord, is referred to in this verse as ādi-rājaḥ, the original or ideal king. He was a great devotee and at the same time a great hero who conquered over all undesirable elements in his kingdom. He was so powerful that he was equal in fighting to Indra, the King of heaven. He gave protection to his citizens, keeping them engaged in pious activities and devotion to the Lord. He did not collect a single cent of taxes from the citizens without being able to give them protection from all calamities. The greatest calamity in life is to become godless and therefore sinful. If the state head or king allows the citizens to become sinful by indulging in illicit sex life, intoxication, meat-eating and gambling, then the king is responsible, and he has to suffer the resultant sequence of reactions for the sinful lives of the citizens because he levies taxes on them unnecessarily. These are the principles for a ruling power, and because Mahārāja Pṛthu observed all the principles for a ruling chief, he is referred to here as ādi-rājaḥ.

Even a responsible king like Mahārāja Pṛthu can become a pure devotee of the first order. We can distinctly see from King Pṛthu's behavior how he became ecstatic, both externally and internally, in pure devotional service.

Just today we have seen in the newspapers of Bombay that the government is going to repeal its prohibition laws. Ever since Gandhi's noncooperation movement, Bombay has been kept dry and has not allowed its citizens to drink. But unfortunately the citizens are so clever that they have increased illicit distillation of liquor, and although not being sold publicly in shops, liquor is being sold in public lavatories and similar abnormal places. Unable to check such illicit smuggling, the government has decided to manufacture the liquor at cheaper prices so that people can have their supply of intoxication directly from the government instead of purchasing it in public lavatories. The government failed to change the hearts of the citizens from indulging in sinful life, so instead of losing the taxes they collect to inflate the treasury, they have decided to manufacture liquor to supply to the citizens who hanker after it.

This kind of government cannot check the resultant actions of sinful life, namely war, pestilence, famine, earthquakes and similar other disturbances. Nature's law is that as soon as there are discrepancies in regard to the law of God (which are described in Bhagavad-gītā as dharmasya glāniḥ, or disobedience to the laws of nature or God), at once there will be heavy punishment in the form of sudden outbreaks of war. We have recently experienced a war between India and Pakistan. Within fourteen days there have been immense losses of men and money, and there have been disturbances to the entire world. These are the reactions of sinful life. The Kṛṣṇa consciousness movement is meant to make people pure and perfect. If we become even partially pure, as described in the Śrīmad-Bhāgavatam (naṣṭa-prāyeṣv abhadreṣu (SB 1.2.18)), by development of Kṛṣṇa consciousness, then lust and greed, the material diseases of the citizens, will be reduced. This can be made possible simply by broadcasting the pure message of Śrīmad-Bhāgavatam, or Kṛṣṇa consciousness. Big commercial and industrial firms have contributed many thousands of rupees to a defense fund that burns the money in the form of gunpowder, but unfortunately, if they are asked to contribute liberally to advance the Kṛṣṇa consciousness movement, they are reluctant. Under the circumstances, the world will periodically suffer from such upsurges and outbreaks of war, which are the consequences of not being Kṛṣṇa conscious.