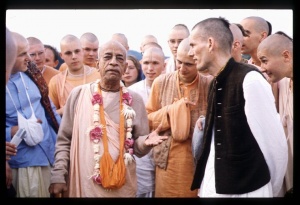 A person who executes his occupational duty properly for one hundred births becomes qualified to occupy the post of Brahmā, and if he becomes more qualified, he can approach Lord Śiva. A person who is directly surrendered to Lord Kṛṣṇa, or Viṣṇu, in unalloyed devotional service is immediately promoted to the spiritual planets. Lord Śiva and other demigods attain these planets after the destruction of this material world.

This verse gives an idea of the highest perfection of the evolutionary process. As described by the Vaiṣṇava poet Jayadeva Gosvāmī, pralaya-payodhi jale dhṛtavān asi vedam. Let us begin tracing the evolutionary process from the point of devastation (pralaya), when the whole universe is filled with water. At that time there are many fishes and other aquatics, and from these aquatics evolve creepers, trees, etc. From these, insects and reptiles evolve, and from them birds, beasts and then human beings and finally civilized human beings. Now, the civilized human being is at a junction where he can make further evolutionary progress in spiritual life. Here it is stated (sva-dharma-niṣṭhaḥ) that when a living entity comes to a civilized form of life, there must be sva-dharma, social divisions according to one's work and qualifications. This is indicated in Bhagavad-gītā (BG 4.13):

"According to the three modes of material nature and the work ascribed to them, the four divisions of human society were created by Me."

In civilized human society there must be the divisions of brāhmaṇa, kṣatriya, vaiśya and śūdra, and everyone must properly execute his occupational duty in accordance with his division. Here it is described (sva-dharma-niṣṭhaḥ) that it does not matter whether one is a brāhmaṇa, kṣatriya, vaiśya or śūdra. If one sticks to his position and properly executes his particular duty, he is considered a civilized human being. Otherwise he is no better than an animal. It is also mentioned herein that whoever executes his occupational duty (sva-dharma) for one hundred births (for instance, if a brāhmaṇa continues to act as a brāhmaṇa) becomes eligible for promotion to Brahmaloka, the planet where Lord Brahmā lives. There is also a planet called Śivaloka, or Sadāśivaloka, which is situated in a marginal position between the spiritual and material worlds. If, after being situated in Brahmaloka, one becomes more qualified, he is promoted to Sadāśivaloka. Similarly, when one becomes even more qualified, he can attain the Vaikuṇṭhalokas. The Vaikuṇṭhalokas are targets for everyone, even the demigods, and they can be attained by a devotee who has no desire for material benefit. As indicated in Bhagavad-gītā (BG 8.16), one does not escape material miseries even if he is elevated to Brahmaloka (ābrahma-bhuvanāl lokāḥ punar āvartino 'rjuna). Similarly, one is not very safe even if he is promoted to Śivaloka, because the planet of Śivaloka is marginal. However, if one attains Vaikuṇṭhaloka, he attains the highest perfection of life and the end of the evolutionary process (mām upetya tu kaunteya punar janma na vidyate). In other words, it is confirmed herein that a person in human society who has developed consciousness must take to Kṛṣṇa consciousness in order to be promoted to Vaikuṇṭhaloka or Kṛṣṇaloka immediately after leaving the body. Tyaktvā dehaṁ punar janma naiti mām eti so 'rjuna (BG 4.9). A devotee who is fully in Kṛṣṇa consciousness, who is not attracted by any other loka, or planet, including Brahmaloka and Śivaloka, is immediately transferred to Kṛṣṇaloka (mām eti). That is the highest perfection of life and the perfection of the evolutionary process.