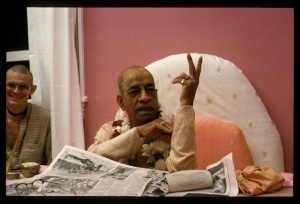 In this material world there are different types of achievement, but of all of them the achievement of knowledge is considered to be the highest because one can cross the ocean of nescience only on the boat of knowledge. Otherwise the ocean is impassable.

Actually everyone is suffering within this material world due to ignorance. Every day we see that a person without knowledge commits some criminal act and is later arrested and punished, despite the fact that he actually may not have been conscious of his sinful activity. Such ignorance prevails throughout the world. People do not consider how they are risking their lives in an attempt to have illicit sex life, kill animals to satisfy their tongue, enjoy intoxication and gamble. It is very regrettable that the leaders of the world do not know of the effects of these sinful activities. They are instead taking things very easily and are succeeding in making the ocean of nescience wider and wider.

Opposed to such ignorance, full knowledge is the greatest achievement within this material world. We can practically see that one who has sufficient knowledge is saved from many dangerous pitfalls in life. As stated in Bhagavad-gītā (BG 7.19), bahūnāṁ janmanām ante jñānavān māṁ prapadyate: "When one actually becomes wise, he surrenders unto the Supreme Personality of Godhead." Vāsudevaḥ sarvam iti sa mahātmā sudurlabhaḥ: "Such a great soul is very rarely to be found."

This Kṛṣṇa consciousness movement is determined to open wide the eyes of the so-called leaders, who are full of ignorance, and thus save them from the many pitfalls and dangerous conditions of life. The greatest danger is the danger of getting a body lower than that of a human being. It was with great difficulty that we attained this human form of life just to take advantage of this body and reestablish our relationship with the Supreme Personality of Godhead, Govinda. Lord Śiva advises, however, that those who take advantage of his prayers will very soon become devotees of Lord Vāsudeva and thus will be able to cross the ocean of nescience and make life perfect.