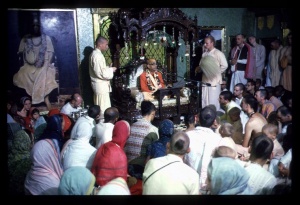 As stated in Bhagavad-gītā (BG 6.22), yaṁ labdhvā cāparaṁ lābhaṁ manyate nādhikaṁ tataḥ: if one can attain the favor of the Supreme Personality of Godhead, he has nothing to aspire for, nor does he desire any other gain. When Dhruva Mahārāja became perfect by austerity and saw the Supreme Personality of Godhead face to face, he was offered any kind of benediction he wanted. However, Dhruva replied that he did not want anything, for he was perfectly satisfied with the benediction of seeing the Lord. Except for the service of the Supreme Lord, whatever we want is called illusion, māyā. Śrī Caitanya Mahāprabhu said: jīvera 'svarūpa' haya-kṛṣṇera 'nitya-dāsa' (CC ''Madhya'' 20.108). Every living entity is an eternal servant of the Lord; therefore when one engages in the service of the Lord, he realizes the highest perfection of life. A faithful servant can fulfill any desire by the grace of the master, and one who engages in the transcendental loving service of the Lord has nothing to aspire for separately. All his desires are fulfilled simply by engaging constantly in the Lord's loving service. Lord Śiva shows us that any devotee can be successful simply by chanting the prayers which he has recited.