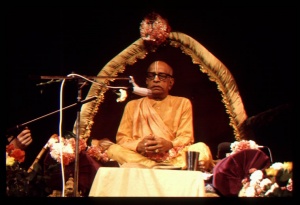 Dear Lord, You have no enemies or friends. Therefore You are equal to everyone. You cannot be contaminated by sinful activities, and Your transcendental form is always beyond the material creation. You are the Supreme Personality of Godhead because You remain everywhere within all existence. You are consequently known as Vāsudeva. We offer You our respectful obeisances.

The Supreme Personality of Godhead is known as Vāsudeva because He lives everywhere. The word vas means "to live." As stated in Brahma-saṁhitā, eko 'py asau racayituṁ jagad-aṇḍa-koṭim: (BS 5.35) the Lord, through His plenary portion, enters into each and every universe to create the material manifestation. He also enters into each and every heart in all living entities and into each and every atom also (paramāṇu-cayāntara-stham). Because the Supreme Lord lives everywhere, He is known as Vāsudeva. Although He lives everywhere within the material world, He is not contaminated by the modes of nature. The Lord is therefore described in Īśopaniṣad as apāpa-viddham. He is never contaminated by the modes of material nature. When the Lord descends on this planet, He acts in many ways. He kills demons and performs acts not sanctioned by the Vedic principles, that is, acts considered sinful. Even though He acts in such a way, He is never contaminated by His action. He is therefore described herein as śuddha, meaning "always free from contamination." The Lord is also sama, equal to everyone. In this regard, He states in Bhagavad-gītā (BG 9.29), samo'haṁ sarva-bhūteṣu na me dveṣyo 'sti na priyaḥ: the Lord has no one as His friend or enemy, and He is equal to everyone.