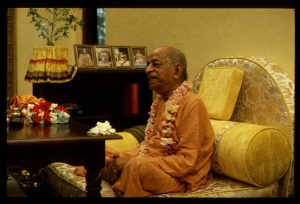 A civilized human being has three kinds of births. The first birth is by a pure father and mother, and this birth is called birth by semen. The next birth takes place when one is initiated by the spiritual master, and this birth is called sāvitra. The third birth, called yājñika, takes place when one is given the opportunity to worship Lord Viṣṇu. Despite the opportunities for attaining such births, even if one gets the life-span of a demigod, if one does not actually engage in the service of the Lord, everything is useless. Similarly, one's activities may be mundane or spiritual, but they are useless if they are not meant for satisfying the Lord.

The word śaukra janma means "taking birth by seminal discharge." Animals can take their birth in this way too. However, a human being can be reformed from the śaukra janma, as recommended in the Vedic civilization. Before the birth takes place, or before father and mother unite, there is a ceremony called garbhādhāna-saṁskāra, which must be adopted. This garbhādhāna-saṁskāra is especially recommended for higher castes, especially the brāhmaṇa caste. It is said in the śāstras that if the garbhādhāna-saṁskāra is not practiced among the higher castes, the entire family becomes śūdra. It is also stated that in this age of Kali, everyone is śūdra due to the absence of the garbhādhāna-saṁskāra. This is the Vedic system. According to the pāñcarātrika system, however, even though everyone is a śūdra due to the absence of the garbhādhāna-saṁskāra, if a person has but a little tendency to become Kṛṣṇa conscious, he should be given the chance to elevate himself to the transcendental platform of devotional service. Our Kṛṣṇa consciousness movement adopts this pāñcarātrika-vidhi, as advised by Śrīla Sanātana Gosvāmī, who says:

"As bell metal, when mixed with mercury, is transformed to gold, a person, even though not golden pure, can be transformed into a brāhmaṇa, or dvija, simply by the initiation process." (Hari-bhakti-vilāsa 2.12) Thus if one is initiated by a proper person, he can be accepted as twice-born immediately. In our Kṛṣṇa consciousness movement, we therefore offer the student his first initiation and allow him to chant the Hare Kṛṣṇa mahā-mantra. By chanting the Hare Kṛṣṇa mahā-mantra regularly and following the regulative principles, one becomes qualified to be initiated as a brāhmaṇa, because unless one is a qualified brāhmaṇa he cannot be allowed to worship Lord Viṣṇu. This is called yājñika janma. In our Kṛṣṇa consciousness society, unless one is twice initiated—first by chanting Hare Kṛṣṇa and second by the Gāyatrī mantra—he is not allowed to enter the kitchen or Deity room to execute duties. However, when one is elevated to the platform on which he can worship the Deity, his previous birth does not matter.

"Even if one is born in the family of a caṇḍāla, if one engages in the devotional service of the Lord, he becomes the best of brāhmaṇas. But even a brāhmaṇa who is devoid of devotional service is on the level of the lowest dog-eater." If a person is advanced in devotional service, it does not matter whether he was born in a caṇḍāla family. He becomes purified. As Śrī Prahlāda Mahārāja said:

Even if one is a brāhmaṇa and is qualified with all the brahminical qualifications, he is considered degraded if he is averse to worshiping the Supreme Personality of Godhead. But if a person is attached to the service of the Lord, he becomes glorified even if he is born in a caṇḍāla family. Indeed, such a caṇḍāla can deliver not only himself but all his family predecessors. Without devotional service, even a proud brāhmaṇa cannot deliver himself, and what to speak of his family. In many instances in the śāstras it is seen that even a brāhmaṇa has become a kṣatriya, vaiśya, śūdra, mleccha or non-brāhmaṇa. And there are many instances of one's being born a kṣatriya or vaiśya or even lower and, in the eighteenth year, attaining elevation to the brahminical platform by the process of initiation. Therefore Nārada Muni says:

It is not a fact that because one is born in a brāhmaṇa family he is automatically a brāhmaṇa. He has a better chance to become a brāhmaṇa, but unless he meets all the brahminical qualifications, he cannot be accepted as such. On the other hand, if the brahminical qualifications are found in the person of a śūdra, he should immediately be accepted as a brāhmaṇa. To substantiate this there are many quotations from Śrīmad-Bhāgavatam, Mahābhārata, Bharadvāja-saṁhitā and the pañcarātra, as well as many other scriptures.

As far as the duration of life of the demigods, concerning Lord Brahmā it is said:

The duration of one day of Brahmā is one thousand times greater than the four yugas, aggregating 4,320,000 years. Similarly, Brahmā's one night. Brahmā lives for one hundred years of such days and nights. The word vibudhāyuṣā indicates that even if one gets a long life-span, his life-span is useless if he is not a devotee. A living entity is the eternal servitor of the Supreme Lord, and unless he comes to the platform of devotional service, his life-span, good birth, glorious activities and everything else are null and void.