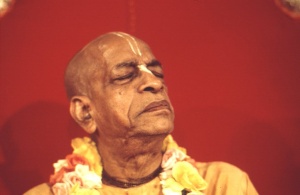 Lakṣmī, the goddess of fortune, is worshiped by all materialistic men, including big kings, and demigods in heaven. Lakṣmī, however, is always after the Supreme Personality of Godhead, even though He does not require her service. Brahma-saṁhitā says that the Lord is worshiped by hundreds and thousands of goddesses of fortune, but the Supreme Lord does not require service from any of them because if He so desires He can produce millions of goddesses of fortune through His spiritual energy, the pleasure potency. This very Personality of Godhead, out of His causeless mercy, becomes dependent on the devotees. How fortunate, then, is a devotee who is thus favored by the Personality of Godhead. What ungrateful devotee will not worship the Lord and enter into His devotional service? Actually, a devotee cannot forget his obligation to the Supreme Personality of Godhead even for a single moment. Śrīla Viśvanātha Cakravartī Ṭhākura says that both the Supreme Lord and His devotee are rasa jña, full of transcendental humor. The mutual attachment between the Supreme Lord and His devotee is never to be considered material. It always exists as a transcendental fact. There are eight types of transcendental ecstasy (known as bhāva, anubhāva, sthāyi-bhāva and so on), and these are discussed in The Nectar of Devotion. Those who are unaware of the position of the living entity and the Supreme Person, Kṛṣṇa, think that the mutual attachment between the Lord and His devotees is a creation of the material energy. Factually such attachment is natural both for the Supreme Lord and for the devotee, and it cannot be accepted as material.