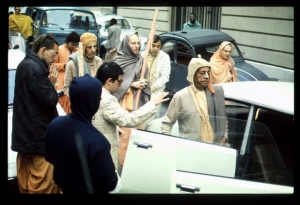 Although the mental scope of even demigods like Brahmā was unable to comprehend the unlimited glories of the Supreme Lord, they were all able to perceive the transcendental form of the Supreme Personality of Godhead by His grace. Only by such grace could they offer their respectful prayers according to their different capacities.

The Supreme Lord, the Personality of Godhead, is always unlimited, and His glories cannot be completely enumerated by anyone, even by a personality like Lord Brahmā. It is said that Ananta, a direct incarnation of the Lord, has unlimited mouths, and with each mouth He has been trying to describe the glories of the Lord for an unlimited span of time, yet the glories of the Lord remain unlimited, and He therefore never finishes. It is not possible for any ordinary living entity to understand or to glorify the unlimited Personality of Godhead, but one can offer prayers or service to the Lord according to one's particular capacity. This capacity is increased by the service spirit. Sevonmukhe hi jihvādau (Bhakti-rasāmṛta-sindhu, 1.2.234) means that the service of the Lord begins with the tongue. This refers to chanting. By chanting Hare Kṛṣṇa, one begins the service of the Lord. Another function of the tongue is to taste and accept the Lord's prasāda. We have to begin our service to the Unlimited with the tongue and become perfect in chanting, and accepting the Lord's prasāda. To accept the Lord's prasāda means to control the entire set of senses. The tongue is considered to be the most uncontrollable sense because it hankers for so many unwholesome eatables, thereby forcing the living entity into the dungeon of material conditional life. As the living entity transmigrates from one form of life to another, he has to eat so many abominable foodstuffs that finally there is no limit. The tongue should be engaged in chanting and in eating the Lord's prasāda so that the other senses will be controlled. Chanting is the medicine, and prasāda is the diet. With these processes one can begin his service, and as the service increases, the Lord reveals more and more to the devotee. But there is no limit to His glories, and there is no limit to engaging oneself in the service of the Lord.