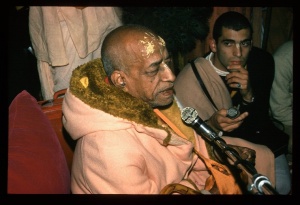 We offer our respectful obeisances unto the Supreme, who has created varieties of manifestations and put them under the spell of the three qualities of the material world in order to create, maintain and annihilate them. He Himself is not under the control of the external energy; in His personal feature He is completely devoid of the variegated manifestation of material qualities, and He is under no illusion of false identification.

Two situations are described in this verse. One is the creation, maintenance and annihilation of the material world, and the other is the Lord's own establishment. There is also quality in the Lord's own establishment, the kingdom of God. It is stated here that Goloka is His personal situation. There is also quality in Goloka, but that quality is not divided into creation, maintenance and annihilation. In the external energy, the interaction of the three qualities makes it possible for things to be created, maintained and annihilated. But in the spiritual world, or the kingdom of God, there is no such exhibition, since everything is eternal, sentient and blissful. There is a class of philosophers who misunderstand the appearance of the Personality of Godhead within this material world. They are under the impression that when the Supreme Personality of Godhead appears, He is under the spell of the three qualities, like all the other living entities who appear within this material world. That is their misunderstanding; as it is clearly stated here (sva-saṁsthayā), by His internal potency He is transcendental to all these material qualities. Similarly, in Bhagavad-gītā the Lord says, "I appear by My internal potency." Both the internal and external potencies are under the control of the Supreme, so He does not come under the control of either of these potencies. Rather, everything is under His control. In order to manifest His transcendental name, form, quality, pastimes and paraphernalia, He brings into action His internal energy. On account of the variegatedness of the external potency, there are manifestations of many qualitative demigods, beginning with Brahmā and Lord Śiva, and people are attracted to these demigods according to their own material quality. But when one is transcendental or surpasses the material qualities, he is simply fixed in the worship of the Supreme Personality. This fact is explained in Bhagavad-gītā : anyone engaged in the service of the Lord is already transcendental to the variegatedness and interaction of the three material qualities. The summary is that the conditioned souls are being pulled by the action and reaction of the material qualities, which create a differentiation of energies. But in the spiritual world the worshipable one is the Supreme Lord and no one else.