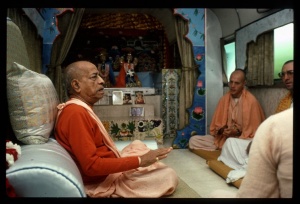 The Vidyādharas said: Dear Lord, this human form of body is meant for attaining the highest perfectional objective, but, impelled by Your external energy, the living entity misidentifies himself with his body and with the material energy, and therefore, influenced by māyā, he wants to become happy by material enjoyment. He is misled and always attracted by temporary, illusory happiness. But Your transcendental activities are so powerful that if one engages in the hearing and chanting of such topics, he can be delivered from illusion.

The human form of life is called arthada because the body can very nicely help the embodied soul to achieve the highest perfection. Prahlāda Mahārāja said that even though temporary, the body can give us the highest perfectional achievement. In the process of evolution from the lower to the higher grade of living, the human form of life is a great boon. But māyā is so strong that in spite of achieving this great boon of the human form of life, we are influenced by temporary material happiness, and we forget our goal of life. We are attracted by things which will cease to exist. The beginning of such attraction is the temporary body. In this horrible condition of life there is only one way of liberation—to engage in the activities of transcendental chanting and hearing of the holy name of the Supreme Lord: Hare Kṛṣṇa, Hare Kṛṣṇa, Kṛṣṇa Kṛṣṇa, Hare Hare/ Hare Rāma, Hare Rāma, Rāma Rāma, Hare Hare. The words yuṣmat-kathāmṛta-niṣevakaḥ mean "those who engage in relishing the nectar of the topics of Your Lordship." There are two narrative books which especially concern the words and activities of Kṛṣṇa.Bhagavad-gītā is the instruction given by Kṛṣṇa, and Śrīmad-Bhāgavatam is the book containing topics exclusively about Kṛṣṇa and His devotees. These two books are the special nectar of the words of Kṛṣṇa. For those who engage in the preaching of these two Vedic literatures it is very easy to get out of the illusory conditional life imposed upon us by māyā. The illusion is that the conditioned soul does not try to understand his spiritual identity. He is more interested in his external body, which is only a flash and which will be finished as soon as the time is designated. The whole atmosphere will change when the living entity has to transmigrate from one body to another. Under the spell of māyā, he will again be satisfied in a different atmosphere. This spell of māyā is called āvaraṇātmikā śakti because it is so strong that the living entity is satisfied in any abominable condition. Even if he is born as a worm living within the intestine or abdomen in the midst of urine and stool, still he is satisfied. This is the covering influence of māyā. But the human form of life is a chance to understand, and if one misses this opportunity, he is most unfortunate. The way to get out of illusory māyā is to engage in the topics of Kṛṣṇa. Lord Caitanya advocated a process whereby everyone may remain in his present position without change but simply hear from the proper authoritative sources about Kṛṣṇa. Lord Caitanya advised everyone to spread the word of Kṛṣṇa. He advised, "All of you become spiritual masters. Your duty is simply to talk to whomever you meet of Kṛṣṇa or of the instructions given by Kṛṣṇa." The International Society for Krishna Consciousness is operating for this purpose. We do not ask anyone to first change his position and then come to us. Instead, we invite everyone to come with us and simply chant Hare Kṛṣṇa, Hare Kṛṣṇa, Kṛṣṇa Kṛṣṇa, Hare Hare/ Hare Rāma, Hare Rāma, Rāma Rāma, Hare Hare, because we know that if one simply chants and hears the topics of Kṛṣṇa, one's life will change; he will see a new light, and his life will be successful.