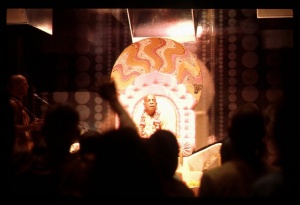 The Lord continued: My dear Dakṣa Dvija, I am the original Personality of Godhead, but in order to create, maintain and annihilate this cosmic manifestation, I act through My material energy, and according to the different grades of activity, My representations are differently named.

As explained in Bhagavad-gītā (BG 7.5), jīva-bhūtāṁ mahā-bāho: the whole world is energy released from the supreme source, the Personality of Godhead, who, it is further stated in Bhagavad-gītā, acts in superior energies and inferior energies. The superior energy is the living entity, who is part and parcel of the Supreme Lord. As parts and parcels, the living entities are not different from the Supreme Lord; the energy emanated from Him is not different from Him. But in the actual activity of this material world, the living entity is under the different qualities of material energy and in different forms. There are 8,400,000 life forms. The same living entity acts under the influence of the different qualities of material nature. The entities have different bodies, but originally, in the beginning of creation, Lord Viṣṇu is alone. For the purpose of creation, Brahmā is manifested, and for annihilation there is Lord Śiva. As far as the spiritual entrance into the material world is concerned, all beings are part and parcel of the Supreme Lord, but under the covering of different material qualities they have different names. Lord Brahmā and Lord Śiva are qualitative incarnations of Viṣṇu, as guṇa-avatāras, and Viṣṇu with them accepts control of the quality of goodness; therefore He is also a qualitative incarnation like Lord Śiva and Lord Brahmā. Actually the different names exist for different directions, otherwise the origin is one only.