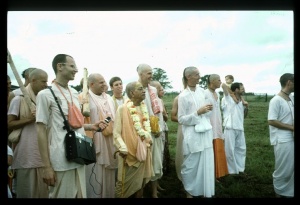 Ambikā [goddess Durgā], who was known as Dākṣāyiṇī [Satī], again accepted Lord Śiva as her husband, just as different energies of the Supreme Personality of Godhead act during the course of a new creation.

According to a verse of the Vedic mantras, parāsya śaktir vividhaiva śrūyate: (CC Madhya 13.65, purport) the Supreme Personality of Godhead has different varieties of energies. Sakti is feminine, and the Lord is puruṣa, masculine. It is the duty of the female to serve under the supreme puruṣa. As stated in Bhagavad-gītā, all living entities are marginal energies of the Supreme Lord. Therefore it is the duty of all living entities to serve this Supreme Person. Durgā is the representation in the material world of both the marginal and external energies, and Lord Śiva is the representation of the Supreme Person. The connection of Lord Śiva and Ambikā, or Durgā, is eternal. Satī could not accept any husband but Lord Śiva. How Lord Śiva remarried Durgā as Himavatī, the daughter of the Himalayas, and how Kārttikeya was born, is a great story in itself.