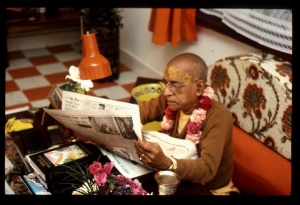 The great sage Nārada overheard this news, and understanding all the activities of Dhruva Mahārāja, he was struck with wonder. He approached Dhruva, and touching the boy's head with his all-virtuous hand, he spoke as follows.

When Dhruva Mahārāja was talking with his mother, Sunīti, of all the incidents that had taken place in the palace, Nārada was not present. Thus the question may be raised how Nārada overheard all these topics. The answer is that Nārada is trikāla-jña; he is so powerful that he can understand the past, future and present of everyone's heart, just like the Supersoul, the Supreme Personality of Godhead. Therefore, after understanding the strong determination of Dhruva Mahārāja, Nārada came to help him. It may be explained in this way: The Supreme Personality of Godhead is present in everyone's heart, and as soon as He understands that a living entity is serious about entering devotional service, He sends His representative. In this way Nārada was sent to Dhruva Mahārāja. This is explained in the Caitanya-caritāmṛta. Guru-kṛṣṇa-prasāde pāya bhakti-latā-bīja: (CC Madhya 19.151) by the grace of the spiritual master and Kṛṣṇa, one can enter into devotional service. Because of Dhruva Mahārāja's determination, Kṛṣṇa, the Supersoul, immediately sent His representative, Nārada, to initiate him.