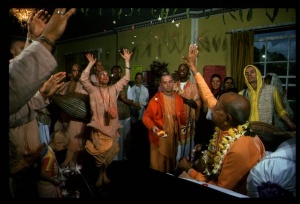 The sage Maitreya continued: The great personality Nārada Muni, upon hearing the words of Dhruva Mahārāja, became very compassionate toward him, and in order to show him his causeless mercy, he gave him the following expert advice.

Since the great sage Nārada is the foremost spiritual master, naturally his only activity is to bestow the greatest benefit upon whomever he meets. Dhruva Mahārāja, however, was a child, and so his demand was also that of a playful child. Still, the great sage became compassionate toward him, and for his welfare he spoke the following verses.