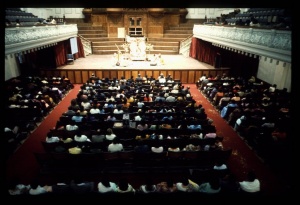 By the fifth month, Mahārāja Dhruva, the son of the King, had controlled his breathing so perfectly that he was able to stand on only one leg, just as a column stands, without motion, and concentrate his mind fully on the Parabrahman.