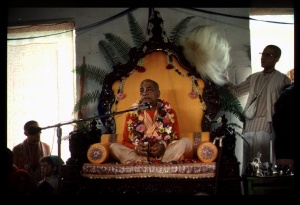 King Uttānapāda had two queens, named Sunīti and Suruci. Suruci was much more dear to the King; Sunīti, who had a son named Dhruva, was not his favorite.

The great sage Maitreya wanted to describe the pious activities of the kings. Priyavrata was the first son of Svāyambhuva Manu, and Uttānapāda was the second, but the great sage Maitreya immediately began to speak of Dhruva Mahārāja, the son of Uttānapāda, because Maitreya was very eager to describe pious activities. The incidents in the life of Dhruva Mahārāja are very attractive for devotees. From his pious actions, one can learn how one can detach himself from material possessions and how one can enhance one's devotional service by severe austerities and penances. By hearing the activities of pious Dhruva, one can enhance one's faith in God and can directly connect with the Supreme Personality of Godhead, and thus one can very soon be elevated to the transcendental platform of devotional service. The example of Dhruva Mahārāja's austerities can immediately generate a feeling of devotional service in the hearts of the hearers.