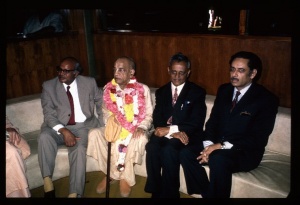 When Dhruva Mahārāja became practically one in heaviness with Lord Viṣṇu, the total consciousness, due to his fully concentrating, and closing all the holes of his body, the total universal breathing became choked up, and all the great demigods in all the planetary systems felt suffocated and thus took shelter of the Supreme Personality of Godhead.

When hundreds of persons are sitting in an airplane, although they remain individual units, they each share in the total force of the airplane, which runs at thousands of miles per hour; similarly, when unit energy is identified with the service of the total energy, the unit energy becomes as powerful as the total energy. As explained in the previous verse, Dhruva Mahārāja, because of his spiritual advancement, became almost the total heaviness, and thus he pressed down the whole earth. Moreover, by such spiritual power his unit body became the total body of the universe. Thus when he closed the holes of his unit body to firmly concentrate his mind on the Supreme Personality of Godhead, all the units of the universe—namely all the living entities, including the big demigods—felt the pressure of suffocation, as if their breathing were being choked. Therefore they all took shelter of the Supreme Personality of Godhead because they were perplexed as to what had happened.

This example of Dhruva Mahārāja's closing the holes of his personal body and thereby closing the breathing holes of the total universe clearly indicates that a devotee, by his personal devotional service, can influence all the people of the whole world to become devotees of the Lord. lf there is only one pure devotee in pure Kṛṣṇa consciousness, he can change the total consciousness of the world into Kṛṣṇa consciousness. This is not very difficult to understand if we study the behavior of Dhruva Mahārāja.