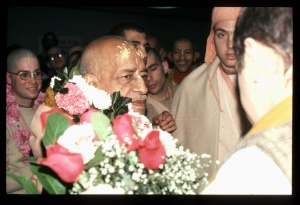 Dear Queen, you must have worshiped the Supreme Personality of Godhead, who delivers His devotees from the greatest danger. Persons who constantly meditate upon Him surpass the course of birth and death. This perfection is very difficult to achieve.

Dhruva Mahārāja was the lost child of Queen Sunīti, but during his absence she always meditated upon the Supreme Personality of Godhead, who is able to rescue His devotee from all dangers. While Dhruva Mahārāja was absent from his home, not only did he undergo severe austerities in the forest of Madhuvana, but at home also his mother prayed to the Supreme Lord for his safety and good fortune. In other words, the Lord was worshiped by both the mother and the son, and both were able to achieve the supreme benediction from the Supreme Lord. The word sudurjayam, an adjective which indicates that no one can conquer death, is very significant. When Dhruva Mahārāja was away from his home, his father thought that he was dead. Ordinarily a king's son only five years old and away from home in the forest would certainly be supposed dead, but by the mercy of the Supreme Personality of Godhead, not only was he saved, but he was blessed with the highest perfection.