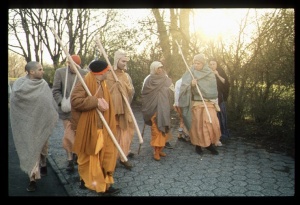 After considering his advanced age and deliberating on the welfare of his spiritual self, King Uttānapāda detached himself from worldly affairs and entered the forest.

This is the sign of a rājarṣi. King Uttānapāda was very opulent and was emperor of the world, and these attachments were certainly very great. Modern politicians are not as great as kings like Mahārāja Uttānapāda, but because they get some political power for some days, they become so much attached to their positions that they never retire unless they are removed from their posts by cruel death or killed by some opposing political party. It is within our experience that the politicians in India do not quit their positions until death. This was not the practice in olden days, as it is evident from the behavior of King Uttānapāda. Immediately after installing his worthy son Dhruva Mahārāja on the throne, he left his home and palace. There are hundreds and thousands of instances like this in which kings, in their mature age, would give up their kingdoms and go to the forest to practice austerity. Practice of austerity is the main business of human life. As Mahārāja Dhruva practiced austerity in his early age, his father, Mahārāja Uttānapāda, in his old age also practiced austerity in the forest. In modern days however, it is not possible to give up one's home and go to the forest to practice austerity, but if people of all ages would take shelter of the Kṛṣṇa consciousness movement and practice the simple austerities of no illicit sex, no intoxication, no gambling and no meat-eating, and chant the Hare Kṛṣṇa mantra regularly (sixteen rounds), by this practical method it would be a very easy task to get salvation from this material world.