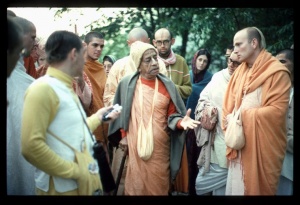 Svāyambhuva Manu, with the assistance of Lord Brahmā, thus fulfilled his desires. With the permission of the great sage Nārada, he delivered to his son the governmental responsibility for maintaining and protecting all the planets of the universe. He thus achieved relief from the most dangerous, poisonous ocean of material desires.

Svāyambhuva Manu was practically hopeless because such a great personality as Nārada was instructing his son Priyavrata not to accept household life. Now he was very pleased that Lord Brahmā had interfered by inducing his son to accept the responsibility for ruling the government of the universe. From Bhagavad-gītā we get information that Vaivasvata Manu was the son of the sun-god and that his son, Mahārāja Ikṣvāku, ruled this planet earth. Svāyambhuva Manu, however, appears to have been in charge of the entire universe, and he entrusted to his son, Mahārāja Priyavrata, the responsibility for maintaining and protecting all the planetary systems. Dharā-maṇḍala means "planet." This earth, for instance, is called dharā-maṇḍala. Akhila, however, means "all" or "universal." It is therefore difficult to understand where Mahārāja Priyavrata was situated, but from this literature his position certainly appears greater than that of Vaivasvata Manu, for he was entrusted with all the planetary systems of the entire universe.

Another significant statement is that Svāyambhuva Manu took great satisfaction from abnegating the responsibility for ruling all the planetary systems of the universe. At present, politicians are very eager to take charge of the government, and they engage their men in canvassing from door to door to get votes to win the post of president or a similar exalted office. On the contrary, however, herein we find that King Priyavrata had to be persuaded by Lord Brahmā to accept the post of emperor of the entire universe. Similarly, his father, Svāyambhuva Manu, felt relieved to entrust the universal government to Priyavrata. Thus it is evident that the kings and executive heads of government in the Vedic age never accepted their positions for sense enjoyment. Such exalted kings, who were known as rājarṣis, ruled only to maintain and protect the kingdom for the welfare of the citizens. The history of Priyavrata and Svāyambhuva Manu describes how exemplary, responsible monarchs performed the duties of government with disinterest, keeping themselves always aloof from the contamination of material attachment.

Material affairs have herein been compared to an ocean of poison. They have been described in a similar way by Śrīla Narottama dāsa Ṭhākura in one of his songs:

"My heart is always burning in the fire of material existence. and I have made no provisions for getting out of it."

"The only remedy is hari-nāma-saṅkīrtana, the chanting of the Hare Kṛṣṇa mahā-mantra, which is imported from the spiritual world, Goloka Vṛndāvana. How unfortunate I am that I have no attraction for this." Manu wanted to seek shelter at the lotus feet of the Lord, and therefore when his son Priyavrata took charge of his worldly affairs, Manu was very relieved. That is the system of Vedic civilization. At the end of life, one must free himself from worldly affairs and completely engage in the service of the Lord.

The word surarṣi-vara-anumatena is also significant. Manu entrusted the government to his son with the permission of the great saint Nārada. This is particularly mentioned because although Nārada wanted Priyavrata to become free from all material affairs, when Priyavrata took charge of the universe by the request of Lord Brahmā and Manu, Nārada was also very pleased.